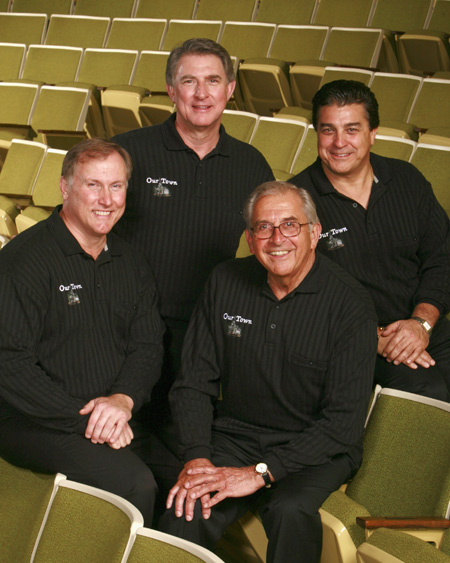 Much like the play, OUR TOWN quartet embraces traditional values. They prefer classic songs by great American writers and composers; songs that lend themselves to four-part harmony singing, a unique American art form. Influenced by popular quartets of the past, including the Mills Brothers and Buffalo Bills, the group strives for audiences to leave performances humming the songs they heard the quartet sing. All four members boast outstanding credentials within the Barbershop Harmony Society circles.

Michele Adams is finishing her second season as the Assistant Artistic Director of the Boston Children’s Chorus. She conducts five training and intermediate level choirs and directs the innovative education program for urban singers. A native of South Carolina, she has served as a music educator and conductor for students of various ages in Massachusetts, Nebraska, New York, Florida, and South Carolina. Prior to joining the BCC, Adams lived in Nebraska where she was a staff member of the Nebraska Choral Arts Society, conducting both intermediate and advanced level children’s choirs. She also served the American Choral Directors Association as a Repertoire and Standards Chair for the North Central Region and taught for a magnet school for the arts and global studies in Omaha. Adams was a lead teacher with Communities LinkUP!, a collaboration between Carnegie Hall and the Omaha Symphony Orchestra linking the symphony and its musicians with classrooms. Previously, she worked in the New York City Public Schools where, as a Project ARTS (Arts Restoration Throughout the Schools) Liaison, she coordinated arts collaborations between the school and community. She also taught music and founded the choral program in her magnet school. She earned a Bachelor of Music in music education from The University of South Carolina. In addition, she earned a Master of Music in choral conducting from Florida State University where she studied conducting with Rodney Eichenberger and André Thomas. Adams has also completed Level I Kodály certification at New England Conservatory. She has authored articles for affiliate publications of MENC: The National Association for Music Education and the American Choral Directors Association and is active as an adjudicator and speaker. She and her husband, Nick, are delighted to be living on the east coast again. They have one daughter, Anna Beth.

Joey Blake is one of the founding and current members of Voicestra, the a cappella ensemble created by Bobby McFerrin in 1989. He currently tours and performs with the Trio We Be 3, an all-vocal group that performs totally improvised concerts. Joey also was a founding member of the ensemble SoVoSo, a six member a cappella ensemble that spun from Voicestra. Joey recorded & produced five albums for this group, (Precious - a European release, Bridges and Seasonings for the US, as well as Crack the Nut and Then and Now). He also holds numerous arranging credits to his name, including his work with SoVoSo. His discography includes recordings with McFerrin (Medicine Music, CircleSongs), Kenny Loggins, Mickey Hart, to name a few. His has two solo CDs (Through My Eyes, Songs from the singing soul) and one with We Be 3 (Live & Improvised). Joey has taught at the Oakland College Prep School as The contemporary Vocal Instructor, and has served as Director of music at The Golden Gate Academy in Oakland, California. He was commissioned by the Oakland Youth Chorus to write and arrange for its professional touring ensemble, Vocal Motion. Joey was on the faculty of the Berkeley Jazz School for four years, as the Conductor of the Berkeley Jazz School A cappella Ensemble, a course that he designed himself.

Victoria Hayes is currently both Program Director and teacher for the Bubs Foundation’s Be The Music Program, which brings a cappella singing classes into schools throughout the Boston area that are in need of musical opportunities. She received her undergraduate degree in music from Colby College and will be graduating this June from the Harvard Graduate School of Education with a Master’s degree in education that focuses on the arts. A vocalist with a strong a cappella background, Victoria was the leader and musical director of Colby College’s oldest all-female a cappella group, the Colbyettes. Victoria is also a classically trained violinist and plays with several orchestras and chamber ensembles throughout New England.

Brian O'Connell is the former Chairman of the Voice Department at Berklee College, where he taught for fifteen years. Presently, he is the Directer of Vocal Activities at Lexington High School, which boasts of one of the largest student directed a cappella programs in the nation. Brian is also directer of the Sarteano Chamber Choral Conducting Workshop each summer in Tuscany, Italy, and directs Canta Mundi (The Greater Boston Scholastic Touring Choir) that will travel to Costa Rica in April. The group is comprised of 15 to 25 year olds, who love to travel and sing. He is an adjunct faculty member at UMass/Lowell, where he teaches Vocal Pedagogy and Choral Methods, and The Boston Conservatory, where he teaches graduate Choral Methods. While at Berklee, Brian was very active in Boston's rock, a cappella and recording scene .

Amanda Roeder directs the Marblehead High School choral program which includes two choirs and four a cappella groups - most notably, the award-winning Jewel Tones and Luminescence. Her ensembles have appeared on the Best of High School A Cappella compilation and have earned five Contemporary A Cappella Recording Award nominations. Amanda serves on the board of the Northeast District of the Massachusetts Music Educators Association and performs extensively as a freelance vocalist and flutist. She holds music education degrees from the University of Massachusetts and Gordon College.

A selection of compact discs from the Primarily A Cappella catalog

A $250 coupon from Discmakers

We are always seeking groups who would like to compete in our events.

Groups of any style are welcome, but you must have between 3 and 8 members. We have a rule book which explains many of the details of the event, which you can see by clicking here. All groups must audition in order to compete. Generally this is done by sending a current tape and photo, although live auditions are sometimes arranged. The purpose of the audition is to make sure the group is appropriate for the Festival and to help the Director determine the performance order. If a group has competed previously, the audition process may be waived.

Please send tapes and photos to the regional director :

Jackie Chisholm (Boston) The Bubs Foundation, formed by alumni of the Tufts University Beelzebubs A cappella singing group, has had a historic mission since 1991 of supporting vocal music programs in Boston-area public schools. With the relentless need to reduce public school budgets, music education programs have been substantially reduced or eliminated. The Bubs Foundation is proud to have contributed over $50,000 in grants to 60 music programs thus far. In addition to its annual grant-making activity, the Bubs Foundation has decided to take a more focused approach to leveraging the principal tenet of the Beelzebubs organization, namely "Fun Through Song". The Foundation will also create and implement a cappella music programs in economically underprivileged middle schools and community agencies.