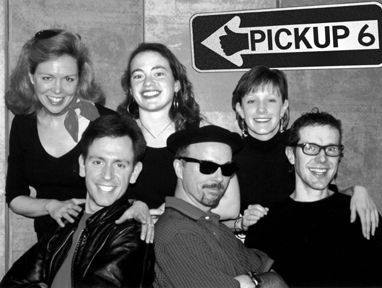 At the crossroads between swinging jazz, sultry soul, and upbeat pop, Pickup 6 delights and entertains audiences with a high-energy a cappella sound. Since 1996, we have journeyed down the musical highway, constantly straddling the double- yellow line between sophistication and fun. Most of our arrangements are by members of the sextet, including standards like "Route 66," blustery, heated ballads like "Fever," or more off-beat fare like "You Never Give Me Your Money" and "Cool" from West Side Story. Performing at jazz clubs and private parties, or spending long nights rehearsing or producing new arrangements, we find joy, challenge, companionship and inspiration in our singing.

6 Day Week is a six-man contemporary, a cappella band hailing from Portland, Maine. The guys first sang together in the Maine Steiners, the premiere a cappella group at the University of Maine at Orono. Wanting to continue singing together as the end of college crept near, the began the transition to the semi-professional a cappella scene. Since then, they have shared the stage with Five O'Clock Shadow,
the House Jacks, and tonight's hosts, Ball In The House.

After Eight is a male a cappella group based in Boston, Massachusetts. It is comprised of graduates from Colby College in Waterville, Maine, ranging from the Class of 1990 to the Class of 1996. After Eight's members all sang in a 50+ year tradition at Colby - the male a cappella group on campus called the Colby Eight. After Eight's membership has changed over its four and a half years. However, this current group has been singing together for over two years. Our set lists consist of varied styles from classic barbershop to contemporary hits, and from doo-wop to spirituals. This variety of styles allows us to perform at various venues. We have enjoyed singing at the Comedy Connection in Faneuil Hall; the Keene Pumpkin Festival, with over 30,000 people in attendance; First Night Annapolis; First Night Providence; the National Anthem at Fenway Park and the Fleet Center; and many private parties, weddings, and other functions. Holding down professional day jobs, we look forward to weekly rehearsals to add to our growing repertoire - and probably more likely - to hang, eat pizza and drink some cold beverages.

Faith in Action is a women's a cappella group, combining gospel and jazz with a variety of musical backgrounds and intricate original arrangements. Founded in March, 1996, the ad hoc group sang the same song (Sweet Honey in the Rock's, "We Are") over several months for church-related events, culminating in a performance at Madison Square Garden in August, 1996 for church members from the District of
Columbia to Maine. After Madison Square Garden, they decided maybe God had a plan for the group, and maybe it was time to learn more than one song. They chose a name, added another member, and learned some original tunes. In the Spring of 1997, Faith in Action started getting connected with the Boston a cappella community, and joined other groups in local performances, including a cappella showcases, clubs (Johnny D's and Ryles), and the 1997 East Coast A Cappella Summit.

House Blend is the product of five women and one man who have song both professionally and leisurely over the past fifteen or more years. Founded in 1997, House Blend's ultimate goal is to share
its love of a cappella music with its audiences, hoping that they have as much fun listening as we have singing. House Blend's sound can best be described as "contemporary funk pop." Combine Boston's WBOS, WFNX, and Kiss 108 and the result is the kind of music we both enjoy and perform. From opera to jazz to Broadway to funk, House Blend's members have sung every kind of music in every kind of venue. Having all enjoyed singing a cappella in college, we have pooled our diverse musical talents and years of experience to produce a strong and versatile band focused on the human voice.

Pickup 6: At the crossroads between swinging jazz, sultry soul, and upbeat pop, Pickup 6 delights and entertains audiences with a high-energy a cappella sound. Since 1996, we have journeyed down the musical highway, constantly straddling the double- yellow line between sophistication and fun. Most of our arrangements are by members of the sextet, including standards like "Route 66," blustery, heated ballads like "Fever," or more off-beat fare like "You Never Give Me Your Money" and "Cool" from West Side Story. Performing at jazz clubs and private parties, or spending long nights rehearsing or producing new arrangements, we find joy, challenge, companionship and inspiration in our singing.

Random Association is a mixed a cappella, modern, vocal band based in Burlington, Vermont. Founded in 1997, we are a dynamic septet of three women and four men bringing infectious energy and fine musicianship to our repertoire of jazz, blues, R&B, pop and original tunes. This past year, we were fortunate to have participated in the Boston East Coast A Cappella Summit, and have received national exposure through our work with Paul Cooper, formerly of the Nylons, and Diane MacDonald, Artistic Manager of Boston's Five O'Clock Shadow.

Similar Jones: Yeah, yeah, yeah, you want to know all about us. Fine. We sing, we've performed with the House Jacks and Sean Altman, we don't dance much. Enough about us. What about you? You like the sound of the human voice. You like long walks in the moonlight...nevermind. You like solid rock and funk, like Stevie Wonder, Jamiroquai, Joe Cocker, and the Temptations. If you're jonesing for tunes like theirs, you're ready for Similar Jones.

SoRare is thrilled to be performing once again in the Harmony Sweepstakes! Since last year's performance here at Tufts University. We have had the pleasure of appearing at various venues throughout New England. Some of our engagements included: Boston's Hampshire House (water glasses on a silver tray), many restrooms and stairwells (great acoustics), various restaurants (a quartet has to eat), and Bridgewater's Fourth of July celebration (a guaranteed standing ovation). Having seen too many Hollywood musicals as children, we keep waiting for passersby to burst into song and follow us dancing through the streets, but, as of this date, we have attracted only one cat in heat and several howling dogs. Nevertheless, SoRare's Karen Christofi, Jannis Moylan, Donna Manoogian and Arlene Isaac will continue to sing wherever and whenever the opportunity arises and we look forward to sharing our "joyful noise" with you this evening.