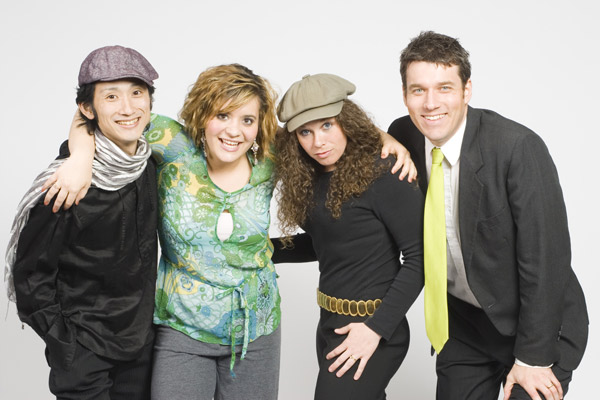 Joey Blake is one of the founding and current members of Voicestra, the a cappella ensemble created by Bobby McFerrin in 1989. He currently performs with the ensemble SoVoSo, a six member a cappella ensemble that spun from Voicestra. He also holds numerous arranging credits to his name, including his work with SoVoSo. His discography includes recordings with McFerrin (Medicine Music, CircleSongs), Kenny Loggins, Dianne Reeves, to name a few. Joey is currently on the faculty of Berklee College of Music in Boston, as an Associate Professor in the Voice Department. He continues to tour with SoVoSo and Bobby McFerrin, while pursuing his solo work and teaching career.

Amy Malkoff is a founding member and bandleader of the award-winning pop-funk vocal band All About Buford, and she has appeared on stage and in the studio with such luminaries as Wayne Brady, Jonatha Brooke, The Persuasions, Ellis Paul, Vance Gilbert, GrooveLily, Patty Griffin, and Dar Williams. She has a degree in music from Kenyon College, with music studies at Youngstown State University and masters-level coursework at the New England Conservatory of Music. Amy was the launching editor-in-chief of the Contemporary A Cappella Society's website, and is also a writer and designer (BOCA - Best Of College A Cappella - '06 and '07). Her music has appeared on both the Rounder Records and Hear Music/Starbucks labels.

Carol Mastrodomenico  maintains an active schedule as a guest soloist with numerous choruses, orchestras and other ensembles and excels in the interpretation of great oratorios. Ms. Mastrodomenico is frequently heard with Boston Vocal Artists, performing the operatic roles of Rita in Donizetti’s Rita and Gasperina in Haydn’s La Canterina.  Her versatility has also been highlighted in BVA recitals where she has performed the works of Purcell, Schubert, Debussy, Bizet and Poulenc. She enjoys singing opera and has performed the roles of Adele, Pamina, Lucy (The Telephone), Clorinda, and Kate Pinkerton. She received her Master of Music degrees in Vocal Performance and Vocal Pedagogy at New England Conservatory of Music.  Ms. Mastrodomenico is the voice curriculum teacher during the summer at the Heifetz International Music Festival in New Hampshire.  She is presently on the voice faculty of Tufts University where she is also the Opera Ensemble Director.  She maintains an active private studio in Woburn and is one of the returning guest faculty at the Longy School of Music.

Brian O’Connell has spent many years as a performer in the Boston area, both in the rock and a cappella scenes. He was on the faculty of Berklee College for fifteen years – nine years as chair of the Voice Department. Now Brian directs the Sarteano Chamber Choral Workshop in Tuscany, Italy during the summers, is an adjunct faculty member of the Boston Conservatory and UMass/Lowell and choral director at Lexington High School. Incidentally, Lexington High is home to perhaps the largest assemblage of student-directed a cappella groups in the nation with seven groups functioning at present. Many of Lexington’s groups have been selected for The Best of High School A Cappella CD – a national compilation. Mr. O’Connell, as a frequent clinician at music conferences has through the years stressed the importance of these student-directed ensembles to the over-all health of the choral program.

John Clark attended Tufts University where he sang with and directed the Tufts Amalgamates. After graduation, he formed the semi-pro group 7Seconds who won the 1997 Boston Regional Harmony Sweepstakes. John is known mainly for his work in recording various collegiate, as well as semi-professional and professional a cappella groups. He is the producer and recording engineer for The Hyannis Sound, Brandeis VoiceMale, The BU Dear Abbeys, The Bostonians of Boston College, The Suffolk Ramifications, The Dartmouth Aires (paired with Ed Boyer), Invisible Men, Firedrill!, Naturally7, and many others.