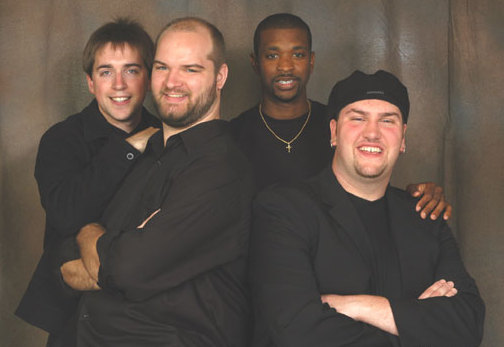 Men in Black is a young quartet bringing a fresh youthful sound and personality to barbershops classic standards and drawing appeal to its ever evolving sound in today's world. Their passion for the barbershop style was rewarded in July of 2005 when they were awarded he 2005 gold medal as the MBNA International Collegiate Quartet Champions. Once winning at this level, they immediately began to take on "the big boys" and in October of 2005 they were crowned the best in the Northeast.

Jamshed Bharucha was named Provost and Senior Vice President in 2002. He formerly served as Dean of Faculty and Deputy Provost at Dartmouth College, where he was the John Wentworth Professor of Psychological and Brain Sciences. At Dartmouth, he received the Huntington Teaching Award and the Undergraduate Teaching Initiative Special Award, and held appointments in the Center for Cognitive Neuroscience, the Program in Linguistics and Cognitive Science, and the Program in Electro-Acoustic Music. He was a Fellow at the Center for Advanced Study in the Behavioral Sciences at Stanford in 1993-94 and a visiting scholar at Cornell and Carnegie Mellon Universities. Dr. Bharucha‚s research is on the perception of music, using computational neural net modeling and brain imaging techniques. He has received numerous research grants, has served on the National Science Foundation‚s advisory panel in Perception and Cognition, and was Editor of the interdisciplinary journal Music Perception. His work has been featured on National Public Radio, US News & World Report, Discover magazine, and the New York Times. He has co-developed two successful software products for teaching. A 1978 graduate of Vassar College, he received a master‚s degree in philosophy from Yale in 1979 and a Ph.D. in psychology from Harvard in 1983. He served as a Trustee of Vassar College for eight years, where he chaired the Budget and Finance Committee. He is a Trustee of the International Foundation for Music Research.

Mezzo-soprano Penelope Bitzas has performed in the United States and abroad in opera, oratorio and contemporary music and Greek music. She has sung as a soloist under notable conductors including Kurt Masur, Seiji Ozawa, Luciano Berio, George Tsontakis and others. She has performed as a soloist in the New England area with Back Bay Chorale, MIT Chorus and Orchestra, Boston University Chorus and Orchestra, ALEA III, Just in Time Players and the Bangor Symphony. Her students are successfully singing in major summer opera apprenticeships and in opera houses throughout the United States. Ms Bitzas has been on the faculties of Gustavus Adolphus College, Ithaca College, Wagner College and is currently an Associate Professor of Music in Voice at the School of Music at Boston University.

Joey Blake is one of the founding and current members of Voicestra, the A Cappella ensemble created by Bobby McFerrin in 1989. He currently performs with the ensemble SoVoSo, a six member A Cappella ensemble that spun from Voicestra. Joey has recorded & produced five albums for this group, (Precious - a European release, Bridges and Seasonings for the US, as well as Crack the Nut and Then and Now). He also holds numerous arranging credits to his name, including his work with SoVoSo. His discography includes recordings with McFerrin (Medicine Music, CircleSongs), Kenny Loggins, and Mickey Hart, to name a few. His latest solo release is entitled Through My Eyes.  Joey is also a renowned teacher in the Bay area. His desire to teach is motivated by his need to give back to the music that fills his life with so much joy. Joey has taught at the Oakland College Prep School as the contemporary vocal Instructor, and has served as Director of music at The Golden Gate Academy in Oakland, California. He was commissioned by the Oakland Youth Chorus to write and arrange for its professional touring ensemble, Vocal Motion.  Joey was on the faculty of the Berkeley Jazz School for four years, as Conductor of the Berkeley Jazz School A Cappella Ensemble, a course which he designed himself. He teaches and holds a Board position for Young Performers International, a non-profit organization where he continues his work with children. Joey also teaches alongside Bobby McFerrin during his summer residencies at the Omega Institute in Rhinebeck NY, called "Spontaneous Inventions".

Amy Malkoff is a founding member of the award-winning pop-funk vocal band All About Buford and has appeared on stage and in the studio with such luminaries as Wayne Brady, Jonatha Brooke, The Persuasions, Vance Gilbert, (Broadway darlings / pop band) GrooveLily, and Dar Williams. She has a degree in music from Kenyon College, with music studies at Youngstown State University, and graduate-level coursework at the New England Conservatory of Music. Amy was the launching editor-in-chief of the Contemporary A Cappella Society's website, and designed the art for the '06 and '07 BOCA (Best Of College A Cappella) CDs.

Sue Wellington was born and raised in Wales. She has lived in the Boston area for the better part of the last twenty five years. Sue comes from a musical family and had a solid grounding in piano and string bass, but didn‚t start singing seriously until she realized she needed to balance her work life with a return to music. Since that time she has performed with many different choral groups and a cappella groups in the U.S. and the U.K. She has also studied and performed as a soloist in jazz and cabaret settings, and has performed in musical theater, most notably in a small scale production of "Chicago" in the U.K. where her godchildren (and their fathers) got to see "Auntie Sue" in fishnet stockings and garters! Classical highlights include concerts with the Berkshire Choral Festival in the U.S. and U.K., several seasons with the Harvard Radcliffe Chorus, and an Italian tour in the Venice area in 1998 with the West London Vocal Ensemble, a U.K. chamber choir. Sue started singing close harmony a cappella music with New England Close Harmony Ensemble (now Boston Jazz Voices) more than fifteen years ago. She still sings with BJV as well as with Fretless, a mixed a cappella quintet that took third place in the Eastern Regional Harmony Sweeps back in 2004. Fretless has had some personnel changes over the past couple of years, but hopes to be back in competition in 2008!