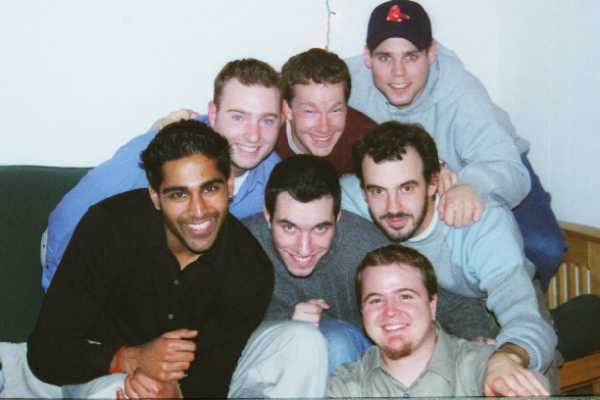 Groove is the newest addition to the Boston a cappella scene. This seven-man group specializes in pop/rock songs arranged and performed in a contemporary style. Individually, the guys have performed in over 2000 a cappella shows as members of the Buffalo Chips, the Binghamton Crosbys, the Boston College Acoustics, the Boston College Bostonians, the UMass Doo-Wop Shop, the Gentlemen of UNH, Jyde, Four Shadow, the Hyannis Sound, and Five O'Clock Shadow. Groove is very excited to be a part of the Harmony Sweepstakes, and share in this evening of great fun and harmony.

The members of A.K.A. Pelican Groove love to joke around, hence the name (phonetically, "A Cappella Can Groove!") But seriously, their sense of humor has sustained an 8-year-long collaboration that has brought them to many new and exciting places (both musically and geographically). Over their history, theyšve performed at hundreds of venues, including corporate events, club dates, wedding gigs, outdoor shows, community concerts, and live appearances on television and radio. One morning last spring, the group made their "drive time" debut on Bostonšs Star 93.7 FM morning show. That same evening, they performed the National Anthem on the hallowed grass of Fenway Park (GO SOX!) Last summer, they had the privilege of sharing the stage at Bostonšs Hatch Memorial Shell with Nile Rodgers and Chaka Khan. A.K.A. Pelican Groove released its first CD "Plunge" in 1999. With a diverse repertoire that spans classic R&B, doo-wop, 70šs soul, 90šs alternative, pop originals, and more, A.K.A. Pelican Groove looks forward to entertaining you tonight, as they bring their own brand of groove-based, "funkified" a cappella into the new millennium.

All About Buford Formed in April of 2000, All About Buford is a mostly a cappella band. All 4 members have completely different backgrounds and musical interests. There's the jazz singer, the Malaysian pop singer/former TV child star, the guitar-totin' singer-songwriter, and the World Music vocal percussionist. Genres are mixed and matched, sometimes within a song! Therefore, youšll hear: R&B, pop, jazz, world music, and contemporary acoustic music. Youšll also hear them use occasional guitar, and some hand percussion. Performing an eclectic mix of originals and covers, All About Buford delivers a high-energy, surprising show.

Groove is the newest addition to the Boston a cappella scene. This seven-man group specializes in pop/rock songs arranged and performed in a contemporary style. Individually, the guys have performed in over 2000 a cappella shows as members of the Buffalo Chips, the Binghamton Crosbys, the Boston College Acoustics, the Boston College Bostonians, the UMass Doo-Wop Shop, the Gentlemen of UNH, Jyde, Four Shadow, the Hyannis Sound, and Five O'Clock Shadow. Groove is very excited to be a part of the Harmony Sweepstakes, and share in this evening of great fun and harmony.

Peking and the Mystics was formed in 1973 by four alumni of both Tufts and the Beelzebubs. Over the years, PATM has: toured nationally and internationally, including trips to the Far East and South America; recorded a CD (and, with a recent recording session in Petaluma, Calif., now in the books, is well on the road to its second disc); appeared on television and radio programs; and been featured in the local and national print media. The group's eclectic repertoire, comprising original arrangements by PATM members themselves, features swing, jazz, doo-wop, and pop music of every decade from the '20s to the '90s. In December 2001, PATM was proud to participate in the Bubs Foundation-sponsored Generations concert at Tufts, and with its inclusion in Harmony Sweepstakes 2002, is again pleased to assist the Foundation in its mission of supporting music curricula in secondary education.

Similar Jones is a high-energy vocal band with a strong, dedicated, and ever-expanding New England following. Our style is primarily rock and soul, influenced by elements of blues, funk, and jazz. Our repertoire consists of cover songs from the 50s, 60s, 70s, and today, and includes a growing number of original tunes. The Jones sound is marked by tight harmonies, intricate rhythms, innovative arrangements, and -- most importantly -- by a rock-solid groove.

Six Appeal Together since the fall of 2001, Six Appeal is Boston's hippest, hottest, and funkiest new vocal band. With a mix of tunes spanning favorite classics to modern hits, these six vocalists kick female-driven a cappella up a notch with dynamic performances that will have you jumping out of your seat and begging for more. With years of a cappella experience under their 20-something belts, Six Appeal is poised to burst into the Boston a cappella scene. Six Appeal: Six voices, 100% appeal.

soniCrush is the product of five women and one man who have sung both professionally and leisurely over the past fifteen or more years. Founded in 1996, as HOUSE BLEND, their ultimate goal is to share its love of a cappella music with its audiences, hoping that they have as much fun listening as soniCrush has singing. The soniCrush sound is an equal mix of covers, both old and new, and originals. From opera to jazz to Broadway to funk, the members of soniCrush have sung every kind of music in every kind of venue. Having all enjoyed singing a cappella in college (they are graduates of Boston College, Brown, Dartmouth, MIT & UNH), they have pooled their diverse musical talents and years of experience to produce a strong and versatile band focused on the human voice.

The Works is a five-part a cappella group, three men and two women, founded in 1994. Comprised of former college chorus dropouts trying to resurrect their vocal chords in what some people call middle age, The Works performs an eclectic (trying to live up to the group title) mix of contemporary close harmony, from the B-52s to Gershwin, from Ricki Lee Jones to James Brown. Based in Hyannis, Wenham, Sherborn, Concord and Wellesley, wešve performed in a wide variety of settings, from intimate anniversary parties to business meetings with large gatherings of 3,000 people in a room to empty squash courts (unbelievable acoustics). The group is characterized by an absence of conflict in rehearsals, perfect pitch, and a subliminally brilliant marketing approach that swayed the French Harmony Sweepstakes judge to select us for the upcoming competition.

Oren Alan Malka -Born and raised in South Florida, Oren came to Boston to study at the Berklee College of Music. While studying in classes under Bob Stoloff, Yamiko Matsuoka, and Paul Stiller, he also briefly performed outside of school with "Ball in the House". After moving back to FL, he was offered and accepted positions performing at MGM Studios with "Four for a Dollar" (aka. Return to Zero) and then along with several present members of Toxic Audio, sang in groups at Universal Studios FL . Shortly thereafter, he auditioned and found a home in "Five O'Clock Shadow" and has been performing and recording with them for the last five years.

Sara Ventre is currently a Marketing/Public Relations major (with a minor in roadcast Journalism) at Emerson College. She was the producer and emcee of the 7th Annual East Coast A Cappella Summit and has been the host of "All A Cappella" on Boston's 88.9FM (WERS) since September of 2000. A Cappella has been a big part of Sara's life since 1993 when she first stumbled upon Rockapella in New York City. She's been hooked ever since. Besides doing the radio show and doing some projects "behind the scenes," you will also find Sara working with the Boston-based vocal band Five O' Clock Shadow. Sara and her WERS co-host are working on a big a cappella concert for next fall, so keep your eyes out! On behalf of myself, my co-host Frances, and the WERS staff, good luck to all those competing this evening.╩

Katie Viqueira's career has developed along two parallel paths: on the one hand, that of voice trainer and Voice Therapist; on the other, that of singing performance as a Professional Singer. Ms. Viqueira graduated as Voice, Speech & Hearing Therapist in 1982 from the Universidad de El Salvador, Buenos Aires, Argentina. Shortly after she pursued graduate studies at the doctoral level at the Universidad del Museo Social Argentino, Buenos Aires, Argentina. In 1995, she was hired by the Centro Andaluz de Teatro Drama Center of AndalucÆa in Sevilla, Spain, where she taught as Professor in the Vocal Technique course. Her vast experience as a singer includes working with some of Argentinašs leading pop singers, international bands such as Air Supply, live performances in radio and TV, and touring throughout Latin America, Europe and the US. She was awarded twice in the prestigious OTI song festival (Contest of the Iberoamerican Television Organization.). Since she moved to Boston in 1997, she has become ęone of the most visible Tango singers on the local sceneė (Elijah Wald, Boston Globe.) In July 1999 she released her CD ęThe Other Side - El Otro Lado,ė with great acclaim by critics and the public. Her recent performances as soloist vocalist include the premiere in the US of ęPueblo Joven,ė an oratorio by Piazzolla, in New Yorkšs Town Hall Theater, accompanied by the Cosmopolitan Symphony Orchestra and directed by Pablo Zinger. Other performing venues include The Regatta Bar, The Providence Jazz Festival, Ryles, Johnny Dšs, The Jorge Hernandez Cultural Center, The Cambridge Multicultural Arts Center, The Berklee College of Music and Tufts University.╩