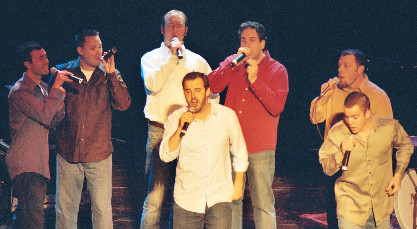 Firedrill!, after returning from California in May 2005; took a 6 month break. In November 2005 Firedrill! reconvened, swapped out a member, learned more tunes and began working hard to prepare for hosting this year's Boston Harmony Sweepstakes.  Just as they were planning their first rehearsal Firedrill!'s answering service received a call from Martin Sexton.  Martin and his staff invited Firedrill! to perform with him on his New Years Eve show in Northampton, MA.  In the distance you could hear "Hey, I heard they're getting Firedrill! back together" and "Yup"  One of Firedrill!'s members even said "That sounds like fun!..."  As it turns out, it was fun.  And lots of it!

5-Alone wowed Boston’s Harmony Sweeps audience last year as the first high school group ever accepted to compete!  Hailing from the Pioneer Valley Performing Arts Public Charter School (Hadley, MA), 5-Alone was named “Best Jazz Vocal Group” two years in a row in DownBeat Magazine’s annual student music awards.  5-Alone is directed by Tony Lechner, and has performed at the North Sea Jazz Festival in The Netherlands, the Monterrey Jazz Festival in California, the International Association for Jazz Education (IAJE) in California, and the Falcon Ridge Folk Festival in Hillsdale, NY.  5-Alone’s CD “Good Vibrations” was named “Best High School Album” of 2004 by C.A.S.A. and received a perfect “5” from the Recorded A Cappella Review Board (RACB).

East Side Story: A vocal band from the Boston area, East Side Story is an exciting group of people who are looking to turn some heads in 2005. ESS's songs will have you up out your seat and eager to sing along!  The group performs covers of pop, rock, and current Top-40 hits, and is looking to expand its repertoire with original tunes.  Originally formed with six men during the Summer of 2002, East Side Story has seen several changes to its original roster. With the current mix of Dan, Holeigh, Ken, Melanie, Nic and Sean, East Side Story has been performing all over Boston in coffeehouses, bars, and local college campuses, and was chosen to compete in the 2004 Harmony Sweepstakes Boston Regional Competition.  East Side Story is a young, enthusiastic, passion-for-a-cappella-filled group of musicians looking to continue to make a name for themselves in the coming months.  2005 is going to be an incredible year for ESS - stay tuned for the next chapter in their story!

Integration By Parts is a six-member vocal band which has been performing in the greater Boston area since 2001.  This merry band of music veterans has crafted a unique sound influenced heavily by jazz, breathing new life into everything from pop to folk to classic rock. The group has competed in the Boston Regional Harmony Sweepstakes for two years running, and was awarded Best Original Arrangement at the 2003 competition. Known for their tight vocal harmonies, but never in danger of taking themselves too seriously, the members of IBP infuse their performances with exuberance and a healthy shot of humor.  The group released its first album, MetroGnome, in 2004.  IBP also heads up the non-profit organization Vocal Band Aid, which brings a cappella performers together to help fund music education.  Integration by Parts: a cappella without limits!

Similar Jones is a high-energy vocal band with a strong and ever-expanding New England following. Infusing a foundation of rock and soul with elements of blues, funk and jazz, they create a sound marked by tight harmonies, intricate rhythms, and a rock-solid groove. The Jones’ crowd-pleasing repertoire combines engaging, original music with innovatively arranged covers. Their latest CD, Can’t Get There From Here, was recently nominated for two Contemporary A Cappella Recording Awards: best contemporary pop/rock album and best contemporary pop/rock cover for Grandma’s Hands. Similar Jones is honored to be recognized among so many talented vocal bands and looks forward to the award announcements later this spring.

Three Men and a Tenor is an A Cappella group in the traditional barbershop style consisting of seniors and juniors from Olean High School located in Western New York. The group, consisting of the Tenor Boris Van Druff; the Lead, Lucas Groth; the Baritone, Larry MacDonald; and the Bass, Ryan Kasperski; have been singing together for approximately two years. They have performed at various a cappella concerts around Western and Central New York and Northwestern Pennsylvania plus numerous school sponsored events. Through these concerts they have received scholarships to attend a cappella singing camps in New York State. All four members have been selected to New York State Area All State Concerts and Solo Fests and All County Concerts and Solo Fests. In addition the Tenor is a New York All State singer and will be traveling this year to the eastern regional All State Concert in Baltimore, MD and the Bass was a member of the 2005 American Choral Directors Association National Honor Choir which performed in February of this year in Los Angeles, CA.

Undertone officially formed in the beginning of 2003, and has been slowly working its way into the Boston a cappella scene ever since. This group is a random concoction of seven wild and fun-loving people, who also just happen to love to sing. Their repertoire mostly consists of Pop, Rock, and R&B covers, but they have started to dabble in the world of original songs. They have performed at several colleges in the area, as well as the All Asia Cafe, Faneuil Hall, and Copley Plaza. Undertone's claim to fame is finishing second place to a belly dancer while competing at a local variety show. If that doesn’t show you that they’re up for anything, what will?!