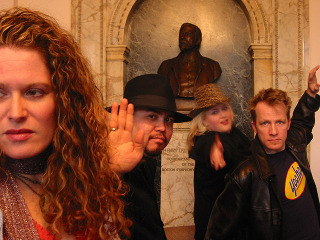 All About Buford wants you to get up, work your groove thang, and laugh your butt off! With a repertoire that infuses jazz, pop, funk, and comedy - their goal is for you to hear new and exciting music, have a great time and join in on the fun! At only 3 years old, All About Buford has already won critical praise and awards: the 2003 Boston Regional Harmony Sweeps winners have performed with Wayne Brady and the acappella legends The Persuasions. Jerry Lawson of the persuasions said: "you're going to go down in the history books!" Recently, they've won in the Acappella Community Awards: runner-up for Best Lead Female Vocal (Taunia Soderquist), runner-up for Best Lead Male Vocal (Shah Salmi), and Best World/Folk Band. With the addition of newest member vocal percussion guru Wes Carroll, All About Buford hopes that things will only get better!
Members - Wes Carroll, Amy Malkoff, Shah Salmi, Taunia Soderquist

All About Buford wants you to get up, work your groove thang, and laugh your butt off! With a repertoire that includes jazz, pop, funk, and comedy – their goal is for you to have a great time and join in on the fun. This year has been an exciting one: they came in second place at the 2002 Boston Regional Harmony Sweeps, performed with Wayne Brady and The Persuasions, and recently won the Acappella Community Awards Best Lead Female Vocal (as runner-up, Taunia Soderquist), Best Lead Male Vocal (as runner-up, Shah Salmi), and Best World/Folk Band. With the addition of newest member Wes Carroll, All About Buford hopes that this year will rock the party even more.
Members - Wes Carroll, Amy Malkoff, Shah Salmi, Taunia Soderquist

Faith in Action is a women’s a cappella group, singing gospel and spiritual songs with touches of jazz. Founded in March of 1996, the ad hoc group sang the same song (Sweet Honey in the Rock’s “We Are”) over several months for church-related events, culminating in a performance at Madison Square Garden in August 1996. After Madison Square Garden, they decided maybe God had a plan for the group, and maybe it was time to learn more than one song. Since then, FIA has performed with the Boston a cappella community (at a cappella showcases, clubs, and East Coast A Cappella Summits), in gospel concerts, for a variety of benefit events, and on WGBH-TV with Bobby McFerrin. FIA placed third in the 1999 Boston Sweeps, and is thrilled to be back with new members and new names.
Members - Janet Appleby Darlene Burgess Christine Federspiel Toni Franklin Rebecca Harrold Jessica Lewis Sharon Metzger

Fretlesss, a mixed voice quintet with a repertoire of jazz, pop, and classical pieces, made its debut in June, 1999. The group blends the soprano, alto, tenor, baritone and bass voices of five multi-talented singers who have appeared with many other jazz and classical ensembles, performing for audiences in the Greater Boston area, across the country, and internationally. “Fretless” chose its name to represent the musical freedom – and challenge – of making music with a fretless instrument, the voice. (Frets are the metal strips on the fingerboard of a guitar or lute which limit those instruments to a finite number of accurately tuned pitches.) The singers have mastered an eclectic repertoire which demonstrates the flexibility of the human voice, provides a varied program of musical pieces, and is lots of fun to sing.
Members - Anna S. Choi Sue Wellington David Getty Bill Reed Charlie Hodges

From the Edge is a female foursome that sings a variety of a cappella music--usually in the barbershop style. They have performed all over the New England area and have recently released their first CD. Lynne Morgan, tenor, from Fairfield, CT, is an illustrator; Penny Schroeder, baritone, from Trumbull, CT, is a medical transcriptionist; Sue Broudy, lead, from Weston, CT, worked in the field of advertising; and Marion Devokaitis, bass, from Farmington, CT, is a retired elementary school teacher. The group is presently the North Atlantic Regional championship quartet of Sweet Adelines International, and is honored to have been chosen to participate in tonight's event.
Members - Sue Broudy Marion Devokaitis Lynne Morgan Penny Schroeder

Integration by Parts is a six-member, co-ed group which has recently burst forth onto Boston a cappella scene. A merry band of a cappella veterans happy to have found a home, the group is quickly becoming known for its tight vocal harmonies and exuberant performance style. IBP has crafted a unique sound influenced heavily by jazz, breathing new life into everything from pop to folk to classic rock. Integration by Parts. a cappella without limits!
Members - Jeff Alderson Melanie Armstrong Liz Baraff Michael King Carolyn Schneyer Greg Simpson

Northeast Connection presents barbershop quartet music in a style reminiscent of the vaudeville era. Precise harmonies and beautiful old songs, wrapped up in an entertaining and folksy package are the trademark of this quartet. Since this foursome began singing together in 1996, they have won the Northeastern District Quartet Championship, and represented the Northeastern District four times at the SPEBSQSA International Contest and Convention. Their personnel comes to the table with a combined total of over 50 years of entertaining audiences all over the country. Be sure to take time to introduce yourself to Northeast Connection. They are, quite simply, four pretty good guys who love to meet new folks!
Members - Rob Lynds Matt Mercier Ralph St. George Dan Washington

Six Appeal - Simultaneously raw and sophisticated, this female-driven vocal band has been kicking a cappella up a notch since 2001. Comprised of four women and two men, Six Appeal blends female harmony with male bass & vocal percussion to create a full, lush sound. The group covers the spectrum of music genres, from standards to classic rock to gospel to modern pop & rock hits, and has performed in a variety of settings in the Boston area. Individually, these six twentysomethings cull experience from college a cappella groups such as the Boston College BC Sharps, Clark University Clark Bars, Dartmouth Dodecaphonics, and Skidmore Accents; professional groups, including NYC's 10fm and Cape Cod’s Hyannis Sound; and even barbershop and opera. Together, Six Appeal is one of the hippest new bands around, proving that the human voice can do almost anything that instruments can... and a lot of things they can't.
Members - Irene Antonellis Christy Colburn Kim Armstrong Force Ben Sigwarth Julie Tucker Matt Wrobel

The Works is a five-part a cappella group, three men and two women, founded in 1994. The group is comprised of a public relations guru at a start-up company, a vascular surgeon, a stay-at-home Dad, a stay-at-home Mom, and a stay-at-home Mom that does marketing communications on the quasi-side. The Works (Dan Gorin, Beverly Jaques, Fred Jordan, Sarah Lazarus and Patrick Rafter) perform an eclectic mix of contemporary close harmony, from the B-52s to Gershwin, from Ricki Lee Jones to James Brown. Based in Hyannis, Wenham, Sherborn, Concord and Wellesley, we’ve performed in a wide variety of settings, from intimate anniversary parties to business meetings with large gatherings of 3,000 people in a room to empty squash courts. The group is characterized by an intense rehearsal regimen (wine, chat, some singing), an absence of conflict when we all agree, and a shameless research-based, in-depth knowledge of tonight’s judges.
Members - Dan Gorin Beverly Jaques Fred Jordan Sarah Lazarus Patrick Rafter

Nancy Marland carries a BFA from the Art Institute of Boston and is currently a self-employed graphic designer, having founded Marland Design in 1990. In this role, Nancy works with arts organizations -- Boston Cecilia, a choral group, and Boston Classical Orchestra, among others -- to design marketing materials and business development campaigns. Nancy has been in and around the Boston a cappella scene since '92. For the past 8 years Nancy has been singing mezzo-soprano with the Boston-based jazz/pop vocal group, The Wicked Pitches. The Pitches have placed in a number of area competitions, including Harmony Sweepstakes in '96 and '97, and the Acoustic Underground competition in '95.

Anne C. S. Kalis' love of music and passion for performing began at an early age and has not stopped since. While earning a BS degree in Secondary French Education from the University of Wisconsin-Madison, she sang with the prestigious University Concert Choir, formed her own vocal trio, and played lead roles in Diary of Anne Frank, Coyote Ugly, and An Evening with Sondheim. After moving to Chicago to begin her career in marketing research, Anne performed in several community theater shows, and sang/co-directed in one of Chicago's premiere co-ed a cappella groups, Lake Shore Jive, for three years. She currently lives in Boston and continues to feed her passion for the performance arts as a vocal freelancer.

Recently named one of Boston Magazine's "40 Bostonians to Watch," Allyssa Jones has been a member of the Boston Arts Academy music faculty since 2000. There, she has created and implemented new curriculum for vocal technique, music theory, jazz vocal ensemble and music history. Ms. Jones has also served as a choir director for churches in the Philadelphia and Chicago areas, and as an adjunct teacher at Robert Morris College in Chicago. Most recently, her work in music education resulted in a panel seat during the 2002 Grammy/NARAS Careers in Music Seminar at Berklee College of Music. In addition to her background as a music educator, Ms. Jones is a professional vocalist and a former arts presenter. Her credits include an appearance in Southport Records' annual "Women of Southport Jazz Festival" and the production of "Tuesday Jazz," the Chicago Cultural Center's weekly jazz concert series. Ms. Jones holds a B.S. in Music Education from Adelphi University and a M.M. in Music Education from Northern Illinois University.

James Ryan received his musical training at Indiana University and has sung with the San Francisco and Chicago Lyric Opera companies, among others. His first experience singing on stage came in a high school production of Music Man in which he was the lead tenor in the barbershop quartet. Currently, he is the executive director of the Cloud Foundation which funds and promotes programs in the arts for at-risk kids in the Boston metro area.