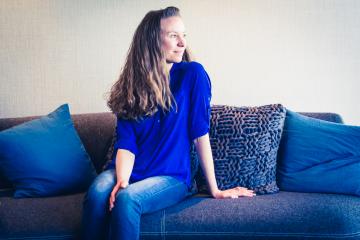 Sarah (née Adamson) learned to sing when she learned to talk, and has hardly stopped doing either since that day. For the sanity of her less musically inclined sibling, a family rule of “no singing at the dinner table” was established early on, but her singing was greatly encouraged in all other regards by her guitar- and organ-playing father, and by her musical mother who recorded a country music album with her guitar and voice in her youth. She developed her vocal skills with singing lessons, has always been a part of one or more choirs or vocal ensembles, and has dabbled in musical theater.

After leaving behind high school band (but not her high school band boyfriend, who is now her cherished husband), Sarah continued to play the flute and sing in ensembles in University. The U of C Vocal Jazz Ensemble is where she first began singing with some members of Altra Volta in 1999, and she has been enjoying making music of all kinds with this dynamic group of people ever since.

When she isn't singing, Sarah is an elementary school teacher, and a parent of two amazing children, Penny and Elliot (though admittedly she does a good deal of singing in both of those roles as well!), and finds a creative outlet in writing songs and stories.