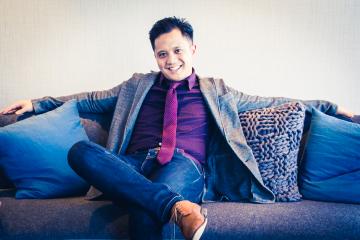 Noel is an accomplished, well-rounded musician versed in various guitar styles, piano, organ and voice. In addition, he is the proud husband of a beautiful concert flutist and father of 3 wonderful children named Lilah, Nash and Lincoln. Perhaps when the boys are out of diapers, the three of them will create an ensemble of their own!

Following his early musical experiences on the guitar at age 7, this Calgary born musician began singing and playing in garage bands, boy bands, man bands and any other type of band imaginable. As a result, choral ensemble work came naturally. As a graduate from the University of Calgary with a Bachelor of Arts in Economics in 2004 as well as a Bachelor of Arts in Music in 2007, Noel attributes his wonderfully fulfilling family life to his first music class in university, where he met his wife!

Known for his genuine and natural musical expression as a performer, Noel thrives in creative, energetic and dynamic ensembles that captivate audiences. In addition to being a long-standing member of Altra Volta, Noel is also the co-founder of the Amante Duo, who actively perform at wedding ceremonies, corporate/private events, and various public venues in the Calgary area. You may also have seen him performing with Luminous Voices, one of Calgary’s only professional choirs, as well as the Spiritus chamber choir, or in collaboration with various other well-known groups in Calgary.