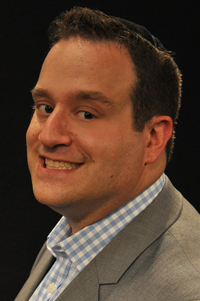 Mike Boxer is a pure musician who brings an extensive background in a cappella to a group that is taking it to a new plateau. In addition to directing the group, he's composed most of Six13's originals and arranged their complete repertoire. He's been making music since the age of three, and has spent more time consuming, creating and cultivating contemporary Jewish a cappella than anyone probably ever should. As founder and director of Halfway Coherent Productions, he has produced or contributed to dozens of Jewish music albums both a cappella and otherwise, runs the annual Jewish Performing Arts Festival and bi-annual Best of Jewish A Cappella CD series, and hosts the KolCast, the monthly podcast dedicated to Jewish a cappella. He began at Binghamton University where he was the director of Kaskeset, as well as the Binghamton Crosbys, with whom he won the International Championship of Collegiate A Cappella.

Referred to as "one of the most brilliant, hard-working a cappella musicians of our generation" by Mouth Off host Dave Brown, Mike is an arranger who has penned more than 200 a cappella arrangements for dozens of groups around the world, a music educator who leads workshops and consults with ensembles of all kinds, and a performer who has worked with a long list of artists, ensembles and agencies both live and in the studio, with and without instruments. For Mike Boxer, connections to both music and Judaism have always enhanced each other and continue to deepen every day.