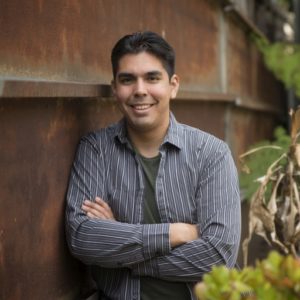 Juan-Carlos “JC / Gaye-C / Chasez ” Martinez is the group’s Tenor 1, making him the 4th (and incidentally most unattractive) girl in the group. JC sought musical “greatness” from an early age, taking piano lessons in elementary school. However, that was not “cool” enough so he picked up the alto saxophone shortly after. He reached the pinnacle of his suavity in high school when he joined marching band and learned the powerful allure of the glidestep. He began his venture into a cappella in college at UC Davis when he was asked to audition with a friend for moral support and was invited to stay (Thank you, The Afterglow!). Fast forward a few years and he missed reveling in aca-weirdness so much he sought out Side Note and was lucky enough to join (Thank you, Side Note!) At karaoke, JC will often spend too much time staring at the song book and singing along with everyone else because he should have picked that song. He is also permanently stuck in the 90s and will pick songs to remind you of that.