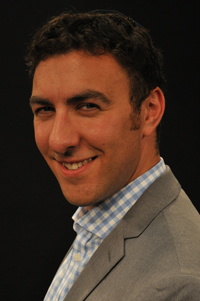 Eric has been in love with performing ever since he took stage at the age of ten in Bye Bye Birdie. He's grown up a little bit since then, but what's grown even more is his love for music. His Jewish a cappella career began at Binghamton University, where he earned bachelor's degrees in Political Science and Music. In 2004, he joined Binghamton's Jewish a cappella group, Kaskeset, and in 2005 he became their musical director, setting them on course to tour the tri-state area, Washington D.C., Florida and California, and to produce two award-winning albums. Since then he has created numerous a cappella arrangements, including "Yerushalayim Shel Zahav", published by Transcontinental Music. When he's not singing, Eric educates high school students in the Bronx.