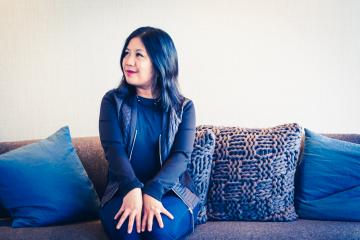 Charishe has been involved in music as long as she can remember. An instrumentalist most of her childhood, she honed her musical skills on the piano (eventually attaining a Royal Conservatory ARCT diploma), played alto sax in her junior high and high school bands, and began singing in university. She has sung in vocal groups ever since.

Charishe had no idea that a chance meeting with Altra Volta in 1998 would lead her to be the longest standing group member, and eventually musical director in 2002. And to think, they really just wanted her for her piano skills! Other vocal groups that Charishe has sung with include the University of Calgary Vocal Jazz Ensemble, U of C Chamber Choir, Vocal Group Kiva, and the women’s ensemble Double Treble.

Charishe is also a University of Calgary graduate, with a degree in Chemical Engineering (minoring in Music and Petroleum Engineering) and works at Nexen. Charishe owes a lot of thanks to her husband Gabriel, who is the group’s mascot, roadie, and number one groupie, and has patiently welcomed Altra Volta into their home every week for rehearsal!