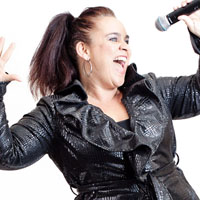 At 11 years old, Shalisa became the voice of Showbiz Pizza’s animatronic mouse, Mitzi Mozzarella. Later, she was the voice of Tessa on the Emmy award-winning PBS show, “The Reppies”. Currently her voice can be heard on over 500 national jingles, hawking everything from laundry soap to liposuction. Winner of the Accappella Community Awards “Favorite Female Vocalist”, Shalisa’s regional stage credits include: THE CHILDREN’S HOUR, 110 IN THE SHADE, ANNIE, VANITIES, and IS THERE LIFE AFTER HIGH SCHOOL? When not performing in Vox Audio, Shalisa is the vocal director for all live shows at Universal Studios, Florida.