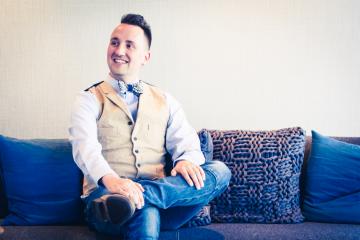 Ryan had no idea, back in 1997, that convincing a group of friends to get together to sing once a week would grow into an ensemble that's still going strong almost two decades later! While the faces have changed (none due to ageing, of course), the heart and passion of the group remains, and he's proud to still be a part of Altra Volta's ongoing legacy.

Ryan's exposure to music began in utero when his dad would blast music from the 60's, 70's, and 80's on the stereo. He's been singing since he learned to talk, and is so thankful to have such a wonderful group of friends with whom to share that passion.

Altra Volta also offers great challenges for Ryan, musically; in part because he never knows if the next song will have him singing bass, baritone, or tenor. It definitely keeps him on his toes, and has allowed him to grow so much as a singer.

Outside of the group, Ryan is a Software Developer, and volunteer with the Stampede Talent Search, and when time permits, a musical theatre performer.