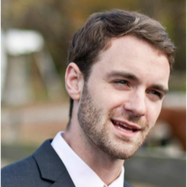 Nate is honored and humbled to have the opportunity to hang out and make music with such a wonderfully talented group. In Jones terms, Nate was formerly a woman. Filling a void in the group left by the inimitable Katie Mills, Nate's been learning all the lady parts. That is… the high notes.

As a child, he never knew that all families didn’t sing table graces in impromptu harmonies before dinner. Singing has been a big part of his life from the get-go. Nate sang with the WPI Men’s Glee Club and acted as its president and student director, and directed Simple Harmonic Motion, their all-male a cappella group. During his tenure with SHM, they were connected with the short-lived Vocal Band-Aid concert, and his eyes were opened to the world of professional and semi-professional vocal bands. Little did he know that he was watching his future group on stage! Nate is fortunate to work with Rob at the Roxbury Latin School, working with IT and running their Invention, Design, Engineering, and Arts (IDEA) Lab. When not working or singing, Nate can likely be found in the wood shop, planting apple trees, pressing cider, or on a backcountry trail somewhere.