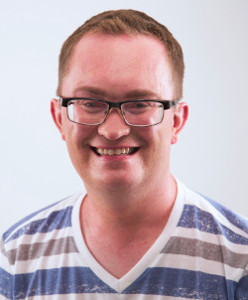 Nate founded Red Harmony in 2009 shortly after moving to Los Angeles a year earlier. At the 2009 Harmony Sweepstakes Los Angeles Regionals, he took home the Best Arrangement Award for The Remedy.

In 2004, Nate graduated from the University of Redlands with a self-designed degree in "vocal jazz studies with an emphasis in maintaining a small vocal ensemble." While there, he lead a mixed vocal octet known as Mixed Blend. On stage, he played Charlie Brown in Clark Gesner's You're a Good Man, Charlie Brown and Toby in Gian Carlo Menotti's The Medium. Later, while living in the Bay Area post graduation, he worked as the catalog manager for Primarily A Cappella (singers.com) and served as associate producer for the Harmony Sweepstakes Bay Area Regionals and National Finals. While mostly focusing on building a name for himself in the world of a cappella music over the last 10 years both in business and performance, Nate has unwittingly built an accounting career at New Wave Entertainment a talent management and post-production company. He is an alumnus of the national music fraternity Phi Mu Alpha Sinfonia.