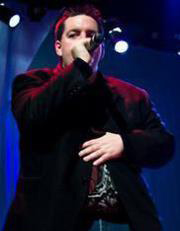 Mike Yanchak has served as the rhythm section of Pittsburgh's All-Vocal Band, DoubleShot!, since founding that act in 2006. In that time he has competed in Sweeps in four cities and garnered nine honors from the Harmony Sweepstakes including a sweep of the Mid-Atlantic honors in 2007 and appearance at the National Finals as well as a second place finish in Pittsburgh's "SING! 2011" bands competition as the only a cappella act in a field comprised entirely of instrumental bands. In his capacities as a producer for the International Championship for Collegiate A Cappella, an ambassador for the Contemporary A Cappella Society of America, and an adjudicator for the Contemporary A Cappella Recording Awards, he is a torchbearer for a cappella music locally and nationally. Mike debuted his one man all vocal live looping act, "Mike Why: One Man Band Without the Band", in August 2010 and is excited to make his first ever OFFSTAGE appearance in the Harmony Sweepstakes.