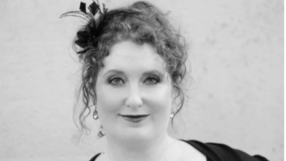 She earned Bachelor of Arts degrees from George Fox University in Newberg, OR in both Vocal Music Performance and Writing/Literature, then packed up her little red Acura and went on to Portland State University as an Oregon Graduate Laurels Scholar where she garnered a Master of Music degree in Conducting. She also holds a Master of Science degree in Special Education (vision emphasis) and by day, she teaches braille and assistive technology skills to visually impaired students (no, she does not know sign language). She recently co-authored a national braille curriculum entitled Building on Patterns published through American Printing House in Louisville, KY.

Kristen has recorded 6 albums with Cappella Romana including Live in Greece, a 10-voice album recorded in Greece, as well as the premiere recording of Robert Kyr's 8-voice work, A Time for Life. In 2011, Kristen lent her voice to Satellite Collective’s collaborative tour and recording project to Michigan featuring composer Nick Jaina and dancers from New York City Ballet. She also recorded vocals for Rachel Taylor Brown's album, World So Sweet. In summer of 2012, Kristen earned critical praise as vocal director for Pentacle Theater’s production of H.M.S. Pinafore. Some of Kristen's tours with Cappella Romana have allowed her to perform in Greece, the National Gallery of Art in Washington D.C., Bing Concert Hall in Stanford, Los Angeles, San Francisco, and most recently at Trinity Wall Street Church in New York as part of their prestigious 2015 Twelfth Night Early Music Festival.

Kristen is thrilled to be Artistic Director of The Julians and enjoys arranging music for them from artists as varied as Alanis Morissette, Cat Stevens, Regina Spektor, and Stevie Nicks to name a few. In her spare time, she is always up for a spur of the moment trip to anywhere, pub quiz, or dinner party. She is grateful to sing with these amazing women, and be a part of this vibrant Portland music community.