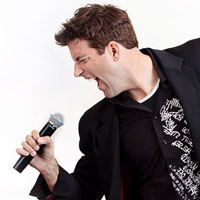 Jeremy has been a host/emcee for special events and awards shows at Walt Disney World and Universal Studios Orlando. He was the host of the GE techno-lab science show at Epcot Center. He was also the spokesmodel for Hilton Grand Vacation Clubs and Disney Vacation Club. Aside from winning the Acappella Community Award for “Best Songwriting”, Jeremy’s career highlights include: winning the Drama Desk Award for his Off-Broadway show, “Toxic Audio”, guest starring on Nickelodeon’s “The Adventures of Shelby Woo”; and being the first male model on the cover of a Tupperware catalogue.

Jeremy has performed in regional productions of Up the Down Staircase, Forever Plaid, Beau Jest, and Is There Life After High School? His commercial credits include Nike, Kodak, Pepsi and Tommy Hilfiger. He received his degree in Advertising at the University of Florida.