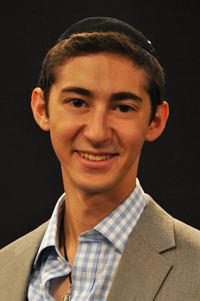 Jacob Spadaro, contrary to popular belief, is not a recent Bar Mitzvah. Jacob was exposed to music at a very young age and strung up as a puppet for his family's entertainment company, to the benefit of all those who wanted to hear a 5-year-old's rendition of "Larger than Life". With 13 years of classical voice training and an arsenal of instruments at his disposal, Jacob brings an eclectic musical background to the group. He has been involved in the Jewish a cappella scene for several years now, singing with Queens' College's Tizmoret, and founding and directing "ReJewvenAishon" during his time spent at Yeshivat Aish Hatorah in Jerusalem. When not on the road with Six13, Jacob can be found cooking up some new recipe, writing music, meditating or clocking hours in the recording studio. Jacob teaches music to middle school students and directs seminars emphasizing the connection between music and spirituality.