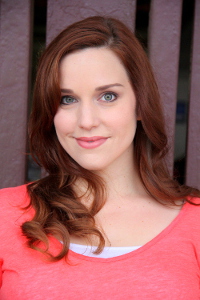 Elizabeth was raised in Arizona. Elizabeth's love for a cappella began in high school in her all-female vocal jazz ensemble "Nothing But Treble." After graduating high school, the twinkling lights and sea air brought her westward to Los Angeles where she attended Loyola Marymount University. While at LMU, Elizabeth hopped on stage as Sheila Bryant in A Chorus Line, Trixie in The Rocky Horror Picture Show, and others. Elizabeth also participated in the "Operafestival di Roma" in Italy, where she played La Badessa in Suor Angelica; and she played the role of Arnalta in the Sinatra Opera workshop's production of The Coronation of Poppea.

After receiving her BA in music (vocal performance), Elizabeth spent six years fulfilling her nerdy-musician-rock star dreams as the lead singer, keyboardist and co-composer of the progressive rock band "Phavian." During this time, she could often be found channeling her inner Peter Gabriel while wearing whimsical face paint and circle-head-banging with a tambourine to strange polyrhythms. After touring nationally and releasing three full-length albums with Phavian, Elizabeth settled in Los Angeles and performs as a singer-songwriter.