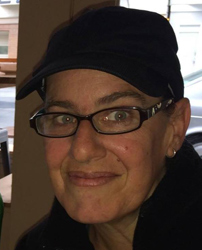 Cynsa Bonorris is the founder and musical director of Mary Schmary, a Bay Area women's a cappella quartet. She has been composing, arranging, and singing a cappella since she founded the Metrotones of Columbia College in 1984. Ms. Bonorris has been a pivotal member of national discussions on women in a cappella, and administers the Women in Harmony a cappella website and the Women's A Cappella Calendar. She has lectured on arranging a cappella at the 1999 West Coast A Cappella Summit, and her song "Babar the Elephant" won Best Original Song at the 1998 Bay Area Regional Harmony Sweepstakes. Her other band, Joe Schmoe, performs bizarre and humorous eclectic musical works in Bay Area clubs. She plays the ukelele, rides a motorcycle, and her hair has been many different shades of blue.