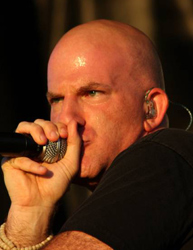 Andrew Chaikin made his name as a singer, songwriter and producer with vocal-band pioneers The House Jacks, and is considered one of the world's foremost vocal percussionists. His beats have funkified albums by the Bobs, the Nylons, and the Persuasions, and caused Chronicle columnist Jon Carroll to devote an entire column to Andrew's "Lips of pure gold.". As a singer and voice-over talent, he can be heard on many national TV and radio commercials, Web sites, and video games. These days he performs live with fellow ex-Jack Austin Willacy, the industrial percussion ensemble Rhythm Slam, and the techno-tribal collective Mixtape From Mars.