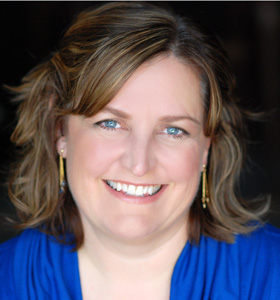 Amy Fogerson - is a Los Angeles-based soloist and ensemble singer who appears regularly with the Los Angeles Master Chorale, the Los Angeles Philharmonic, the Los Angeles Chamber Singers, the Millenium Consort Singers, and the Jacaranda music series. She is best-known to a cappella audiences as the founding alto for 2001 Harmony Sweepstakes National Champions Sixth Wave, and appears on their first two albums.

As a classical soloist, she has performed at many Los Angeles venues, including Walt Disney Concert Hall with the LA Master Chorale and the LA Phil, and at NYC’s Lincoln Center for their “Steve Reich at 70” festival. Amy also has a busy session singing career; she has appeared as a background vocalist on recordings for singers such as LeAnn Rimes, Michael Bublé and Josh Groban and has recorded more than 90 feature film soundtracks, including Frozen, Minions, recent release Hail, Caesar and the upcoming Jungle Book.