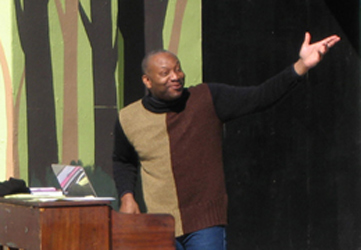 Former Artistic Director of the Oakland Youth Chorus, Trente conducted the OYC in performances and workshops with Bobby McFerrin, Charlie Haden, Nancy Wilson, Ed Kelly, Keith Terry, Dance Brigade, Linda Tillery, Jon Hendricks, Pete Seeger, and Voicestra. Trente also took the chorus on tour to New York, New Orleans, Jamaica, Canada, and Japan, and has participated in the "Festival of Two Worlds" in Spoleto Italy and the "Live from Lincoln Center" broadcasts. A three-time recipient of an “Artist in Residence” grant from the California Arts Council, Mr. Morant is a graduate of Westminster Choir College in Princeton, New Jersey, where he worked with Eugene Ormandy, William Steinberg, Leonard Bernstein and Zubin Mehta while still a student. Recently, he conducted in both the Monterey and San Francisco Jazz Festivals, sang the role of the Swan with the Oakland Ballet in Carmina Burana, performed the role of "Sportin Life" in a concert version of Porgy and Bess with Michael Morgan and the East Bay Symphony and performed with the Alameda Civic Light Opera Company as the “leading player“ in their production of Pippin.