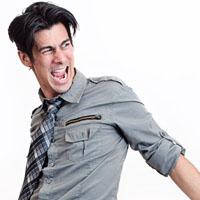 Paul Sperrazza has been performing as a singer since 1996. He has entertained worldwide audiences at Walt Disney World, Universal Studios, on Royal Caribbean Cruise Lines, Luxor, Las Vegas and Planet Hollywood, Las vegas. Mr. Sperrazza is the Co-creator and Co-director of Vox Audio, off-Broadway’s a cappella sensation. During the span of his career, he has become most known for his ability to weave true-to-life impersonations of instruments such as electric guitar, and drums into high-energy vocal peformances which occasionally include physical acrobatics. He is currently touring the world entertaining audiences from New York to Japan with Vox Audio, winner of the 2004 Drama Desk Award for “Best Original Theatrical Experience”.

As a clinician and performance coach Paul hopes to spread his message about being fearless when performing to high school and college students across the nation.