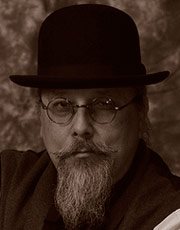 Jim Partridge has been one of the regular suspects committing folk music in the San Francisco Bay Area music scene for many years now. He can be found at the Hyde St. Pier singing sea songs and shanties, and trolling the docks of San Francisco in search of his other band mates, The Roving Tars, who by they’re very nature, are roving. Approach Mr Partridge with extreme caution, as he has been known to harmonize with complete strangers with no provocation whatsoever.