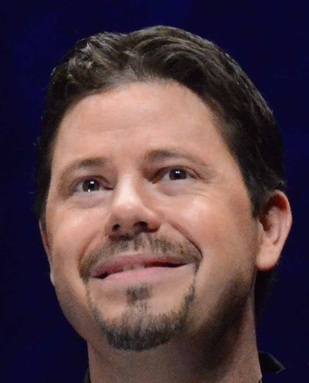 Working our way up the clef to the land of ugly notes, we have our charismatic Baritone, Mr Gabe Caretto. This excessively talented young man is also Music Director of the up-and-coming chorus Voices of California, based in Sacramento. Gabe is way over-educated, owning two bachelors degrees and two Master’s degrees, both in Music and Finance. His career is as the Controller for a large architectural design firm. He’s also a self-described “Jazz-Head” and seems to know most every song ever written. Many of you have seen him on stage previously in Late Show, our 2006 FWD Champs. One of the things that sets Gabe apart is his versatility. He has competed on stage on all four voice parts. Unlike many baritone singers (sorry, guys), its actually really nice when he gets the occasional solo or feature. Gabe has two teenage sons, William and Wesley, and he lives in Elk Grove, CA with his sweetheart Cindy and two huge dogs named Sadie and Sophie.