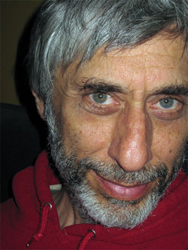 Ed Cohn originally hails from New Jersey where he got a strong foundation in music starting with the clarinet in 3rd grade. By the end of High School he had played many instruments in many school groups as well as a Rock band and played Bari Sax in a college jazz band. His vocal development started in middle school chorus and went on to be a soloist in HS. After 2 years at San Diego State U. he transferred to the SF Conservatory of Music to study opera and got his degree in music. The next ten years were spent performing opera professionally and writing, directing and performing educational shows throughout the Bay Area. In 1988 he and three opera collegues formed the contemporary a cappella group, the EDLOS, the only group ever to win all the prizes in the Harmony Sweepstakes. The EDLOS have been performing ever since and currently have seven albums to their credit as well as their own full length PBS television special. Ed has won numerous awards for his compositions. He teaches voice and conducts a cappella and choral workshops. Ed is also a recording engineer, producer, graphic artist, organic farmer, chef, and father of two grown daughters.