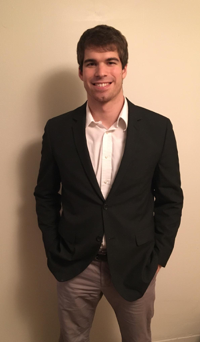 I was born and raised in Rochester, NY. My love of singing began early—by the time I was 4 years old I was happily singing along to hymns in church, and to my brother’s parts in various musicals. As I grew older I dabbled in musical instruments as well, playing the trombone and euphonium, while still singing in every vocal group I could possibly fit into my schedule at school.

I left Rochester for nearby Buffalo after high school, attending University at Buffalo. There I joined the Buffalo Chips, continuing to nurture my love for performance and a cappella music in particular. I graduated in 2014 with a bachelor’s degree in chemistry, which I put to use for the next year and a half as a lab technician at a local company, while continuing to sing for fun with several of my friends.

Near the end of 2015, Ball in the House was in need of a bass, and a couple of friends of mine pointed me in their direction. And thus began my first long-term foray outside of western New York, doing what I love full-time, with my new a cappella family.