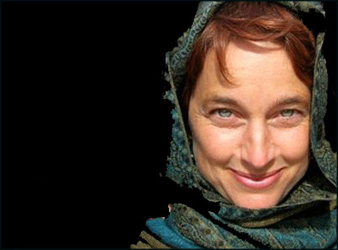 Juliana Graffagna is the Musical Director of KITKA, the acclaimed Bay Area a cappella women's ensemble specializing in traditional and contemporary vocal music from Eastern Europe. Juliana has a B.A. in Russian Studies, and has been singing and performing a cappella music and musical theatre her entire life. Her worlds merged when she discovered KITKA, and she has since had the honor of training with renowned vocalists from Eastern Europe, including Tzvetanka Varimezova, Kremena Stancheva, Merita Halili, Christos Govetas and Mariana Sadovska. KITKA performs extensively throughout the United States and Eastern Europe and has appeared on several major motion picture soundtracks including Jacob’s Ladder, At Play in the Fields of the Lord, Braveheart, and Queen of the Damned. KITKA received a Drama Critic’s Circle Award nomination for their role as the Greek Chorus in ACT’s critically-acclaimed production of Hecuba, starring Olympia Dukakis, and the group has been featured on Garrison Keillor’s A Prairie Home Companion and NPR’s Performance Today and Cross Roads. Juliana leads numerous Balkan and Slavic singing workshops for children and adults, and teaches private voice lessons.