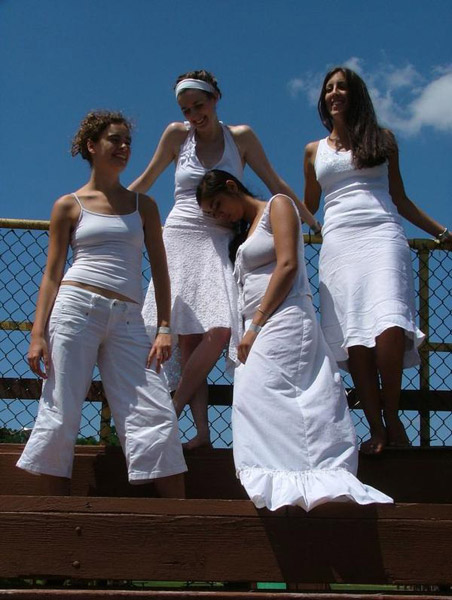 Red No. 5 has been causing a sensation in Connecticut's local music scene. Moving audiences with skillfully tight a cappella harmonies and dynamic performances, the four young women of Red No. 5 have lent their voices to reinvigorate and diversify their home state's musical community. While each woman in the quartet resonates as an individual, the four voices fuse together to create breathtaking harmonies and produce a truly original sound. Red No. 5's self-arranged four-part interpretations are rooted in their creative and unconventional understanding of music. Their eclectic repertoire spans all genres, from folk to soul, reflecting a particular enthusiasm for contemporary a cappella compositions. Red No. 5 looks forward to sharing their music with wider audiences, and is enthusiastic to participate in this year's harmony Sweepstakes.

Margaret Dorn is an award- winning singer, composer, arranger and producer whose work encompasses the recording industry, commercials, film and television, theater, night clubs and the concert stage. As a versatile vocalist and musician she covers a broad range of styles. She has sung with many artists including Celine Dion, Bette Midler, Lionel Richie, Jennifer Lopez, Donald Fagen, Boz Scaggs, k.d. lang, Carly Simon, Michael McDonald, Jessica Simpson, Willie Nelson, Barry Manilow, Michael Feinstein, Diana Ross, Rosanne Cash, Lucie Arnaz, Garth Brooks and The Chieftains. She recently toured the US and Australia with Bette Midler. A highly respected writer and vocal arranger, Margaret’s work includes pop, rock, country, jazz, gospel, r&b, classical, theatrical and some styles that can’t be defined! She has written the score for a new musical, “Faraway Bayou”, featured in the NAMT festival in 2006. She’s always writing and arranging for her elegantly eclectic a cappella group THE ACCIDENTALS. Award winners on both coasts (Back Stage Bistro and 3 MAC Awards in New York; 3 CARA s ), The Accidentals won the Harmony Sweepstakes National Championship-sweeping all the categories in the New York Regional and 3 of the four categories in the National Sweepstakes. With 5 CDs (produced by Margaret), theater and cabaret shows, TV and film scores, and TV appearances (Denis Leary’s “Merry F#$%in’ Christmas”), The AX is still rockin’!

Ray Leslee is an award winning composer and music director. His compositions for the theatre include AVENUE X, the a cappella musical, (Playwrights Horizons) about racial tensions in New York City circa 1963. “Rediscovering what musicals are all about!” –The NY Times. After an extended run Off-Broadway, AVENUE X went on to some 50 productions around the world winning Best Musical in Dallas, Austin, Seattle, San Diego, Los Angeles (Ovation Awards) and Philadelphia’s Barrymore Award for Best Musical 1997. He produced the cast album for RCA Victor/BMG Classics. His cabaret musical STANDUP SHAKESPEARE was directed by Mike Nichols for Off-Broadway and revived in 2005 starring Alfred Molina, F. Murray Abraham and Alice Ripley. A GOOD MAN, a blues musical about a Mississippi tenant farmer, premiered in 2006 at the Vienna Chamber Opera in Austria. ROMEO & JULIET FOR ORCHESTRA & ACTORS was performed by the Buffalo Philharmonic and the New Haven Symphony orchestras. As an 18-year-old rock & roll pianist, he toured with such legendary performers as Jay and The Americans, The Platters, Leslie Gore, The Shirelles, The Drifters, The Capris, and Eddie Floyd. Among many awards and commissions Ray received The Gilman & Gonzalez-Falla Musical Theatre Award in 1997 and was honored at Lincoln Center for his contribution to the American theatre.

Jonathan Minkoff has directed various a cappella groups since 1984. Six of those years were spent as the Founder and Artistic Director of the full-time men's a cappella rock quartet, Blind Man's Bluff. While directing and performing with Bluff, he toured nationally, recorded radio and TV commercials, shared the stage with national recording artists like All-4-One, headlined the Improv Comedy Club, and singing the anthem for the World Champion Chicago Bulls. He has received numerous musical awards including the National Harmony Sweepstakes' Best Original Song and Best Original Composition, Chicago's Sweeps Champion, and Chicago's Audience Favorite. Minkoff judged both collegiate and professional a cappella competitions including the New York and Chicago Harmony Sweepstakes, NCHSA and NCCA. For his own vocal compositions, Minkoff was selected as one of only two composers in the prestigious New York City Genesius Guild's Revolutionary Writers program. Jonathan has been the Executive Director and Producer for the East Coast A cappella Summit since 2003 and he is currently serving his third term as the President of CASA - The Contemporary A Cappella Society, a not-for-profit organization dedicated to the furtherance of a cappella music. In late 2004 Minkoff received national attention as a featured expert in a cappella music on The Jane Pauley Show where he also musically directed, arranged for, and performed with the Jane Pauley Singers. Minkoff runs a vocal-centered recording studio, "Minkoff Arts, LLC", where he records, writes and produces for various artists like: former Boston Harmony Sweepstakes Champions, Ball In the House, Vocal Percussionist Extraordinaire, Wes Carroll, Voiceover Queen, Diana Preisler and others. In 2005, Minkoff joined the pop funk a cappella band, Blue Jupiter as a pro temp member. He is now their producer. Personal Motto: sleep is for the weak.