Visit us on MySpace! 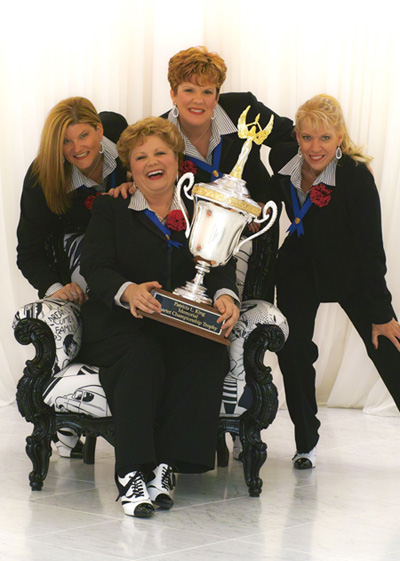 Craig Knudsen - For the past 16 years Craig Knudsen has been a performer / composer / arranger with the EDLOS (the 1989 Harmony Sweepstakes National Champions). In 2001 Craig expanded his horizons to include representation of other performing artists and opened his own talent agency, Knudsen Productions. He is currently the exclusive North American Artist Representative for the multi grammy award winning a cappella sensation, the Swingle Singers; the Grammy nominated early music vocal ensemble, Stile Antico; as well as Voces8; and, yes, The EDLOS. For the past 11 years Craig has also served as the music director for the Kaiser Permanente Educational Theatre Project. A graduate of the Oberlin Conservatory of Music, Craig’s performance credits span a wide variety of musical styles and performance mediums. As an opera and classical singer, he has performed leading roles with Pocket Opera, Mendocino Music Festival Opera, West Bay Opera, Berkeley Opera, Las Vegas Opera, Pacific Repertory Opera and the Austin Opera in Austin, TX. and has been the tenor soloist in numerous oratorios, performing with the Santa Clara Chorale, the U.C. Symphony, the Mendocino Music Festival, The Bronx Arts Ensemble, the Prometheus Symphony, the Valley Chorale Society and the Berkeley Community Chorus and Orchestra. He also toured to the East Coast as a tenor soloist with George Coates Performance Works, performing at the Kennedy Center in Washington, D.C.. Craig originally came to the SF Bay Area in 1982 to join the San Francisco Mime Troupe as a saxophone player/actor/music director, and he toured extensively with the Troupe in the U.S. and Canada and, before that, he was the sax player with the Marcia Ball Band out of Austin, TX. Just to make sure he is always busy, Craig continues to teach private voice lessons out of his studio in Berkeley, CA.

Claytoven Richardson has worked on hundreds of projects throughout his career. Constantly in demand as one of the top session vocalists, his voice can be found on hit video games like Karaoke Revolution Presents: American Idol Encore 1 & 2, as well as on albums featuring Grammy winning artists such as Aretha Franklin, Whitney Houston, Kenny G, Patti Austin, Celine Dion, Marc Anthony, and many others. This vocalist, now author has also penned the book, “The Professional Studio Vocalist”, which spawned from a course he created and currently teaches at San Francisco State University for the Music Recording Industry Department. Claytoven is a serving board member of the San Francisco Chapter of the Recording Academy and is an active participant with non-profit organizations such as Oakland based Youth Movement.

Michele Weir is one of the leading figures in vocal jazz education today. She has earned international recognition through a diverse set of talents as  arranger, teacher, singer and pianist. With dozens of published vocal arrangements to her credit (Hal Leonard, Shawnee Press, Alfred Publishing and others,) plus works for big band and orchestra, Michele is a prolific arranger. In 2004, she also launched her own online publishing company, "MichMusic."  Professional ensembles performing her work include Manhattan Transfer, New York Voices, M-Pact, Beachfront Property, Chanticleer, Voice Trek, the Boston Pops,  and the Buffalo, Cincinnati and Pacific Symphonies. Michele's music has been featured on the Shari Lewis TV show, Disney's "101 Dalmations"  Sing-along CD, and the Holland America Cruise line.

A former member of the Grammy-nominated vocal group "The PM Singers," Michele frequently performs as featured guest vocalist at various jazz festivals.  As a pianist, she has toured extensively with a variety of artists, including singer Bobby Vinton. In her role as Music Supervisor for the DreamWorks film, "Prince of Egypt," she journeyed through Europe and Asia overseeing music production for the film's foreign language dubs. Her solo CD with jazz guitarist Bruce Forman is titled, "The Sound of Music." Currently serving on the faculty of UCLA, Michele has previously taught USC, CSU Long Beach, and the Phil Mattson School.  Highly respected as a teacher and clinician, her work has taken her to more than 20 countries around the globe. Recent notable  presentations include the World Choral Symposium, the IAJE Conference, and the ACDA National Conference. Michele's educational book/CD sets, "Vocal Improvisation" and "Jazz Singer's Handbook"are available worldwide. Her new book/CD Set, "Jazz Piano Handbook"(Alfred Pubs.) was released in January, 2008.

Robin Cohn is a veteran music industry professional and president of City Hall Records. City Hall began in Robin's San Francisco garage in 1973, expanding steadily to become a leading national distributor of hundreds of specialty labels, both domestic and international. From blues, jazz, urban, nostalgia, world, and yes, a cappella - including artists such as the Swingle Singers, King's Singers, Dale Warland Singers, the Bobs and SoVoSo - City Hall has built its success and reputation through supporting independent music.

Accommodation and venue info for out of town attendees

Our Hall Of Fame - The Harmony Sweepstakes National Champions

We are always seeking groups who would like to compete in our events.

Groups of any style are welcome, but you must have between 3 and 8 members. We have a rule book which explains many of the details of the event, which you can see by clicking here. All groups must audition in order to compete. Generally this is done by sending a current tape and photo, although live auditions are sometimes arranged. The purpose of the audition is to make sure the group is appropriate for the Festival and to help the Director determine the performance order. If a group has competed previously, the audition process may be waived.

On a perfect May Saturday night in San Rafael, CA, the sold-out audience witnessed another unbelievable evening of unaccompanied vocal harmony singing. Eight Regional winners were up on stage, singing their hearts out for the fans and the judges, with the National Championship on the line. The best 18 songs of the night, including from local favorites the folk/world female ensemble Solstice with "Wade in the Water" and the dynamic "Kappee." A pair of songs from Audience Favorites Denver's "Face," includes the gritty, powerful rocker "Home," that won them 2nd Place. Three tracks from the evening’s winners National Champs from Los Angeles, Moira Smiley & VOCO with the folk tune "Bring Me Little Water, Silvie," "Szerelem" and the lovely, moving "Stand in that River." Other favorites are New York's The Fault Line's "Some Kind of Wonderful;" the Pacific NW's V-Chords' "Don't You Worry 'Bout a Thing”, Boston's Men in Black's "Run Around" and Chicago's Nightwatch's very funny "Defying Gravity." And let us not forget host group 2006 Champions Hi-Fidelity (hey, that's 2 in a row for L.A.!), whose "Enterprise/Sulu Medley" reminds us how brilliant and funny they can be.

Click Here for Past Recordings of the National Finals