The Harmony Sweepstakes A Cappella Festival, is the premier American showcase for vocal harmony music. The annual national competition draws from hundreds of vocal groups from around the country with regional competitions in eight cities. The winning group from each festival is flown to perform in front of celebrity judges and a sold out house of enthusiastic a cappella fans at the National Finals. 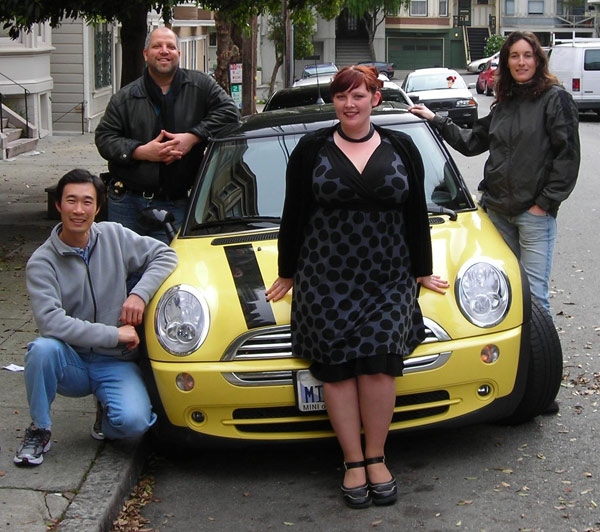 Catherine Rose Crowther follows a dual path of visual art and music. After singing and performing with a number of choirs and a cappella ensembles in her youth, an interest in experimental vocal technique and improvisation led her to Balkan music and eventually to Kitka where she has been singing and performing for over 22 years. This association has provided the opportunity to study with a number of premier vocalists from Eastern Europe. Outside of Kitka, Catherine Rose pursues the vocal and instrumental music of early American and Celtic traditions. Catherine Rose is also an award winning illustrator whose art graces the covers of Kitka's CDs.

Bryan Dyer is a professional musician with almost 20 years of professional experience. He's a versatile multi-instrumentalist and vocalist who has performed many styles of music from classical and avant-garde to rock, jazz and blues. His talents are in a high demand as he performs with as many as 8 different groups at a time. Music has taken Bryan around the world to several different countries including Japan, Switzerland & Jamaica and alongside such artist as Al Green, Michael McDonald and Bonnie Raitt. Some of the groups he currently performs with include SoVoSo, Slammin All-Body Band, Chelle! and Friends, Rankin' Scroo & Ginger and Linda Tillery and the Cultural Heritage Choir.

Phil Fetterman is a Bay Area native with a passion for vocal harmony music and has been involved in music performances, promotions and media of all kinds for over 40 years.  Some of the notables are:  singing in The De Anza Chorale and The Vintage Singers, each under the direction of Dr. Royal Stanton; vocalist and arranger on three album projects for the “Renaissance - Jazz”/folk group Banish Misfortune; host of the morning drive “Breakfast Table” under the name Wayne Phillips on KFAX radio San Francisco; voice-over talent and production at KFAX and KMKY/Radio Disney Oakland.  Phil also worked as the in-house anthem singer and music & effects coordinator for the San Jose Giants baseball organization. In 1992, Phil became a co-host on KKUP’s Human Voice Program, which has become the Bay Area’s premier radio showcase for vocal music.  He worked alongside Phil DeBar, our Master of Ceremonies for tonight’s event and the founder of the Human Voice Show in March of 1985.

Bryan Matheson is the owner of Skyline Studios, a mainstay in the Easy Bay music scene, this year celebrating its 20th anniversary. Bryan has had extensive experience on both sides of the glass, as a recording engineer and as a session singer, and has won numerous awards for his film TV, and radio work. As a vocalist, Bryan has a long list of radio and TV and CD credits, as well as a 2006 Grammy nomination for his work with The Pacific Mozart Ensemble on the Leonard Bernstein Mass, performed and recorded with Kent Nagano at The Berlin Philharmonic. In November 2005, The Pacific Mozart Ensemble performed at Carnegie Hall with renowned New York composer Meredith Monk. Bryan is also the founder and CEO of iMusicast, which from 1999 to 2005 produced live webcasts from its concert venue in Oakland. By creating a unique hybrid of a webcast studio, recording studio, video sound stage and concert venue, iMusicast was able to bring DVD and streaming media production services within reach of independent record labels and artists. Through six years of concerts, iMusicast became the epicenter of a vital East Bay music scene, enjoying enormous support and goodwill from fans, local bands and national touring acts. Bryan recently joined the faculty at San Francisco State University, teaching recording classes in the Music Recording Industry program. He is currently in the studio working on Solstice's new CD.

Ellen Robinson is a jazz vocalist and recording artist with CD's "Mercy! Ellen Robinson Live" released in 2006 and "On My Way To You" released in 2001. "Ellen Robinson is blessed with great pipes." Jazz Improv Magazine. As a a vocal coach, Ellen works with semi professional jazz & popular vocalists as well as adult intermediate singers. In addition, she is the Director of the Anything Goes Choruses in Oakland and San Francisco, mixed community choruses which she founded 28 years ago, and also three women's vocal ensembles: Girlfriendz, Swingshift Singers and Treble Makers.