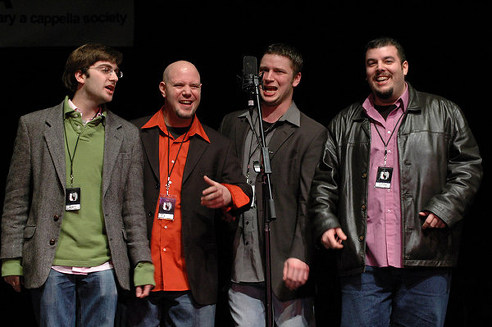 'Round Midnight is a quartet that consists of professional musicians from the Manhattan/Long Island area of New York.  The quartet formed in late 2004 and has been entertaining audiences all over the Tri-State area ever since.  All four men are music teachers.   The first year for ‘Round Midnight has been a whirlwind in which they tied for first place in the Mid-Atlantic District’s Northern Division contest, finished top 10 at the M-AD District contest, and headlined various shows for Barbershop Harmony Society and Sweet Adelines International chapters as well as non-barbershop shows.

Judith Douglas is presently Team Coordinator and Assistant Director of Metro Rhythm Chorus, Sweet Adelines, Int.'l. (SAI)  She  has been a member of SAI for 25 years and has her certification as a "Front Row" Director.  Judy's expertise is in the area of vocal training.  She Directed Golden Apple Chorus, SAI, in Westchester, NY for nine years. Judy has held positions as choreographer and Asst. choreographer for four choruses in the SAI organization and at present, is working toward her judges certification in the Expression Category for SAI. She is excited about this competition and hopes all the hard work will benefit our fine contestants!

William Zukof is one of the founding members of The Western Wind , the internationally acclaimed vocal sextet.  A New York City native, he has appeared as a soloist with the Roger Wagner Chorale, the Gregg Smith Singers, the Handel and Haydn Society of Boston, and Musica Sacra of New York. Mr. Zukof performed the Bach Magnificat under the direction of Leonard Bernstein at the Vatican in Rome. His operatic appearances include roles with the Washington Opera, the Eastern Opera Company, the Eastman School, and the University of California at Berkeley. He has directed hundred of workshops and is also a stage director of opera and music theater. Executive producer for Western Wind Records, he has produced many recordings and publications.

John Dorer started his vocal experience directing the Brown University Jabberwocks (a few years ago). A member of the University Glee Club of New York City and an active quartet competitor for many years, he has served in many capacities, including Director of Music and as President from 1983 to 1985.  He arranges music and has won the coveted Mapletoft Hambone Cup twelve times with various quartets. Since 1978 Mr. Dorer has led The Ten, an 18-man a cappella group, who have sung at the White House, regaled Princess Grace of Monaco, and performed at Carnegie Hall and Avery Fisher Hall.  They sing annually for a wide variety of beneficiaries including churches, hospitals, historical societies and clubs located anywhere from New York to Bermuda.

Raised in Texas, with family roots in country-swing and gospel, Toby Twining has traveled musically from playing for rock and jazz bands to experimental composition at the University of Illinois at Urbana-Champaign, where he earned his Bachelor of Musical Composition degree in 1985.  He moved to New York in 1987, initially writing for modern dance choreographers who wanted the sounds of a new choral music. In 1990, with a group of five New York–based singers, Twining presented the first international live concert of his music in Seoul, South Korea. A year later he formed Toby Twining Music, an a cappella quartet. The ensemble expanded to premiere Chrysalid Requiem in 1999 at Gaudeamus’ “Festival of New Spiritual Music”? in Amsterdam, an hour-length choral work released by Cantaloupe Music in 2002.  His instrumental music has been recorded by pianist Margaret Leng Tan on the Art of the Toy Piano (Uni/Point, 1997) and cellist Matt Haimovitz on Please Welcome Matt Haimovitz (Artemis Classics, 2003) and Anthem (Oxingale/Artemis, 2002).  In 2003, Twining was a Pew Fellow and he is working currently on a new solo recording for Cantaloupe.

Composer, arranger, and singer Roger Treece has spent the past several years developing a new kind of choral music, combining traditional classical elements with jazz, funk, gospel, and the vocal innovations of his frequent collaborator, Bobby McFerrin.  Roger has been commissioned by the Danish Radio Symphony, the Los Angeles Master Chorale, the Chicago Symphony Orchestra’s Ravinia Festival, the Chicago Children's Choir and many others around the world. In addition, Roger has produced and arranged over 30 albums for artists such as the Bobby McFerrin, the Manhattan Transfer, the New York Voices, Mark Murphy, and Janis Siegel, as well as music for film and television, earning him two  Grammy Nominations, fourteen downbeat awards, and industry accolades for his music education projects for children. Roger tours worldwide as a vocal soloist and a member of Bobby McFerrin's 12-piece vocal ensemble, Voicestra and is currently working (writing/arranging, singing and producing) on an upcoming Bobby McFerrin choral album.

Steve Friedman juggles multiple careers in music, communications and technology. As a professional ensemble singer, Steve performs with the St. Michael's Choir and with the 92nd Street Y High Holidays Choir. He was a founding member of Angelus, a six-voice male ensemble based at St. Michael’s Church. He sang on the Douglas Frank Chorale’s recording of The A Cappella Singer. He's been an assistant conductor and singer with The Dessoff Choirs, Cantabile, The Mannes Chamber Singers and Cerddorion. His vocal arrangements have been performed by groups across the country and in Japan. His arrangements of John Denver’s Leaving on a Jet Plane and The Beach Boys’ In My Room were recorded by The Western Wind on their 1997 CD release, My Funny Valentine. His Spiderman was chosen Best Arrangement at the 1998 New York Harmony Sweepstakes. He was a founding member of The Usual Suspects vocal sextet, for whom many of his arrangements were written. His Better Your Tuning workshop addresses intonation and temperament issues faced by vocal ensembles. Steve founded and runs Vocal Area Network, New York’s home for vocal ensemble music, celebrating ten years on the web in March 2006. By day, he works as a sales engineer for Siemens Communications. A lifelong resident of New York City (except for four years at Yale sometime in the last century), Steve lives on the Upper West Side with his wife Julie and future ensemble singers Matthew (born 2000) and Rebecca (born 2003).