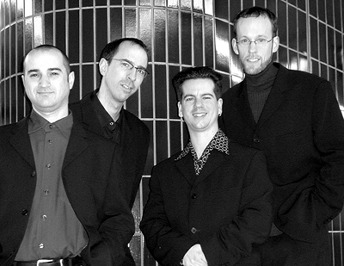 Four men, four microphones, no instruments.  This is the formula for Toronto's celebrated vocal band, Cadence.  This formidable foursome has been dishing up its unique blend of tight harmony, instrumental imitation, high-energy antics, and audience interaction to sold-out audiences - and getting people genuinely excited about vocal music!  The results have earned Cadence international recognition as "one of the finest quartets to make an appearance in the a cappella scene". Cadence is Dylan Bell, Carl Berger, Kevin Fox and Ross Lynde. Four different performance backgrounds, musical sensibilities, and vocal textures contribute to their unique sound.  And whether it's Carl's dark molasses baritone, Kevin's solid groove and bass, Dylan's acrobatic R&B stylings, or Ross' sweet, expressive tenor, audiences find themselves drawn in to the musical experience. Cadence was nominated for a 2001 Juno Award (Canada) and received two Contemporary A Cappella Recording Awards (San Francisco) for their debut CD, frost-free. During the past five years, the Cadence performance schedule has been highlighted by appearances on radio and television, at SkyDome (Toronto's landmark stadium), and at the 2001 World Leaders tribute to Quincy Jones.  The group has also had the honour of performing for Bobby McFerrin and Manhattan Transfer, and has shared the stage with Canada's pioneering quartet, The Nylons.

Cadence - 4 men, 4 microphones, no instruments. Canadian JUNO-nominated vocal band CADENCE, provides music for any occasion, blending musical diversity with entertaining performance. From the Beatles to Gershwin to Mozart, CADENCE does it all and does it with style!

The Fonic The Fonic is a five-man vocal band based in New York City. Founded in 1999 and recently described as "a rock band who left their guitars in the van," The Fonic has appeared at area clubs including Le Bar Bat, Triad, The Elbow Room and The Bitter End. On the road, The Fonic has performed for high school and university audiences, as well as The East Coast A Cappella Summit, The Arlington A Cappella Festival and the Maine Music Society's "Battle of the Blends."

Moondance is a popular award-winning quartet in Region 15 of Sweet Adelines International a womenís barbershop organization. We have been performing together for the past four years, and have competed on the International Level in Orlando Florida. Sure we enjoy singing the barbershop standards, but we love entertaining audiences with our eclectic repertoire ń which also includes songs from the 50ís through the 90ís. Our passion is to show you what a barbershop quartet can do with any style of music - have you ever heard a womenís barbershop quartet perform Bohemian Rhapsody by Queen?

Mystique originated in 1996 and encompases diverse individual vocal backgrounds in pop, jazz, country, gospel and theatre. Their common love of the unique vocal blend found in street corner harmony has them performing in local venues and radio stations from central New Jersey to New York and Deleware.

Pieces of 8 - After a decade touring the Midwest with its unique jazz-influenced blend of American music, Pieces of 8 moved its base to New York in 2001. All of the group's music is composed or arranged by its artistic director, Charles Mead, who draws from jazz, soul, Gospel, rock, Caribbean and other influences. While searching for a new soprano, the group rearranged its charts for seven voices and has performed as a septet since October. The St. Louis Post-Dispatch called Pieces of 8 impressively virtuosic ... tight and sophisticated.

Voxy - Six women, culturally and musically dynamic, create a unique convergence of voices and creative expression that is Voxy. Since its beginnings in 1999, Voxy has aspired to bring a new perspective and approach to contemporary melodies, performing in different languages (as almost all of the ladies are bi-lingual) and applying creative musical styles to popular songs. Recently described as having a lush, musically complex sound, Voxy also aspires to shock its audience from time to time with the unexpected. Stay tuned...