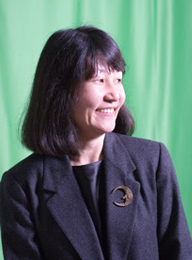 Yumiko Matsuoka, originally from Tokyo, Japan, is professor of ear training at the Berklee College of Music in Boston. She is the founder and one of the principal arrangers/composers of Boston-based a cappella quintet Vox One whose albums Vox One (1993), Out There (1995), Chameleon (1997) and Pure Imagination (2005) have won multiple awards from the Contemporary A Cappella Society of America (CASA). In 2008 Yumiko released an anthology album To Every Thing There Is A Season featuring a cappella and instrumental music spanning 20 years of her writing career. Her arrangements are published by UNC Jazz Press and can also be heard on recordings by other a cappella groups around the globe, as well as TV commercials in Japan. Yumiko is an active clinician, adjudicator and choral director, working locally, nationally and worldwide.