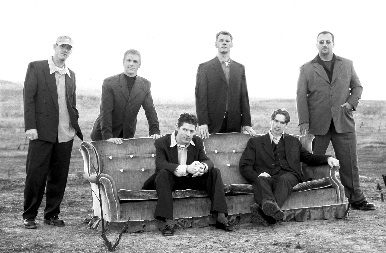 ECLIPSE is a six-man Vocal Band from northern Utah. The band has been in existence for nearly two years. In those two years Eclipse has performed for audiences both nationally and internationally. They were seen in the 2002 Olympic Opening and Closing Ceremonies along with Sting, Leann Rhymes, and the Dixie Chicks. Eclipse has also been the opening act for artists such as Train, Brooks & Dunn, and Nelly Furtado. Their repertoire consists of original tunes and arrangements with styles ranging from Jazz and Swing, to Pop and R&B. Eclipses  debut album was released in April of 2001. Their second and third albums will be released in the summer and Christmas of 2002
Members: Paul Hansen, Kevin Jones, Dan Kartchner, Kirk Mecham, Patrick Rose, and Shayne Taylor

2002 Partcipating groups:
GROOVE SOCIETY is an exciting new group of dedicated artists that has set out to explode the myth that singers are not true musicians. With degrees ranging from vocal performance to music education to theory and composition, individual members have received numerous accolades, including several prestigious "Downbeat Magazine Awards."Although the groups roots are firmly planted in the jazz genre, they are not afraid to demonstrate their versatility by performing in a variety of styles. Whether singing Latin, blues, bebop, rock, funk or R&B, a common thread of exuberant passion and soul runs throughout each performance. Of primary importance to Groove Society’s fresh sound are its innovative arrangements. These thoughtfully crafted gems employ a masterful use of extended harmonies and intricate rhythms while allowing ample space for a soloist to launch into exhilarating improvisations. The resulting experience can blast an audience into the hipisphere.
Members: Bianca Herbert, Cameron Chinatti, Damion Massey, Joe Herbert, Dave Sheehan, Brendan Currin

SPECIAL EFFECTS: A fresh face on the a cappella scene, Special Effects joins four top vocalists to create a wonderful blend and entertaining style that has quickly endeared them to audiences throughout the Denver area. This quartet combines an exciting sound with a diverse repertoire, customized to guarantee an unforgettable entertainment experience.Witih many individual years of musical training and professional experience, together the quartet has achieved top honors in many area competitions. Recent champions at the Aspen Barbershop Festival, they are also currently 2nd place quartet medallists throughout an 8-state region with Sweet Adelines International
Members: Pat Crum, Rebecca Richards, Kim Andrews, Trudy Pardee

ECLIPSE is currently based in Logan, UT. Their debut album, "ONCE," was released in April 2001. They were the 2001 champions of the Pacific Northwest Regional Harmony Sweepstakes and the 1st place winners of Utah’s Talent Competition 2001. They were heavily involved in the entertainment for the 2002 Olympic Winter Games, which included appearances in the Opening Ceremonies and three of the Olympic Medals Presentations. They also performed at all of the competition venues as the "A Cappella Bobsled Team."

measureXmeasure has been thrilling audiences for over five years. They began as a nine-part small choir and , over time, settled on the five part format they now enjoy. Although there is no short version of how the group formed, most of the original members met at the University of Kansas. Before forming the group, the founding members all enjoyed success while singing with various groups. Though there have been 10 different members of measureXmeasure, four of the original members remain and the current lineup has been the same for the last three years.

The name Saturday Evening Post, certainly brings Americana to mind with its famous Norman Rockwell covers. Not unlike the Magazine, the Saturday Evening Post Quartet brings Americana alive with their songs in four-part Barbershop Style. SEP, as they re called, presents the best in Barbershop Harmony with a unique sound that has thrilled audiences throughout the United States. Ý The quartet represents a combined 136 years of performing experience and they present a variety of music that will fit any occasion. From Gospel to Broadway Show Tunes, from Blues and Jazz to Swing, the Saturday Evening Post Quartet will thrill you with their sonorous harmonies and energetic style.

Energetic and fun, SurrounSound performs a blend of upbeat pop, R & B and funk with tight harmonies and driving percussion. SurrounSound was formed by five people who sang together in high school, and their mom (as she is known to a majority of the band.) Passionate about vocal music, this ensemble incorporates the sultry and sweet, the rowdy and raucous into harmonious contemporary a cappella.