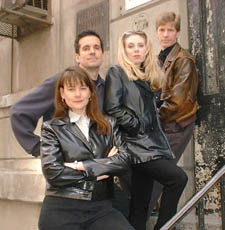 VOX BOP is a mixed a cappella quartet with ultra-smooth voices reminiscent of The Manhattan Transfer and a wry baby-boomer sensibility. Founded in 1995 by David Deschamps, who also does the arranging, Vox Bop was interviewed and featured in a 12-minute piece on National Public Radio's "All Things Considered" on Christmas Eve 1999. They can be currently heard in a national Amazon.com TV ad and were featured as the house band on NBC-TV’ "The Ainsley Harriott Show." Vox Bop's first CD, THE VOX BOP CHRISTMAS VARIETY HOUR, has been much acclaimed: it was nominated for a 1998 CARA award, with one of the cuts ("Mission of The Three Kings") winning Best Arrangement at the 1999 NYC Harmony Sweepstakes. In the summer of 2000 Vox Bop performed at The Alandia Jazz festival in Finland and has also made a name for itself performing for a variety of clients throughout the Northeast, including Bloomberg Financial, Bloomingdales, Borders Books, The Brooklyn Museum, Filene’Äôs, The New Press, Starbucks, and many others. The group finished in the top five at the NYC regionals of the 1998 and 1999 Harmony Sweepstakes and is currently at work on their new CD, "Affluenza."

Dobsonfly is a six-person rock/pop/R&B vocal band based in Manhattan.  Out of a series of online notices, trade-paper ads and personal contacts came the current lineup of a group which has rehearsed in one form or another since mid-1999.  This most recent conglomerate (since mid-2000) has performed at the East Coast A Cappella Summit in Boston and a variety of New York 's well-known venues.  Members are Warren Bloom, Lorelle Holway-Smith, Jason Menkes, Evan Smith, Debbie Tassone and Colette Thompson.

NexTime is a mixed quartet comprised of two female Sweet Adeline members (Marsha Baron, and Bette Silver) and two male SPEBSQSA members (Tom Brucia and Gary Wilson).  NexTime has had the pleasure of singing at several Minor League Baseball Stadiums around the country.  They are also very popular on Valentine 's Day with their Singing Telegrams.  They are proud of their newest trophy for the Funniest  Quartet at the Bolton Landing Barbershop Celebration; as well as taking 6th place overall out of 60 mixed quartets!

Vop Bop is a mixed a cappella quartet founded by arranger David Deschamps in 1995.  They have appeared on NPR 's All Things Considered,  a National Amazon.com TV ad, the Alandia Jazz Festival in Finland and NBC 's Ainsley Harriott Show.  Vop Bop 's first CD, Vop Bop Christmas Variety Hour, was nominated for a CARA in 1998, with one song, "Mission of the Three Kings",  winning best arrangement at the 1999 New York Harmony Sweepstakes.  The members, John Bischoff, David Deschamps, Johanna Grussner and Maura May, are currently working on their new CD, "Affluenza".

The Flatiron5 is a male quintet performing doo wop, barbershop and alternative music.  Founded in 1995, they have played such venues as Macy 's, Chelsea Piers, Sony Plaza, Rockefeller Center and the Cunard 's famous ocean liner, the QE2.  Some favorite performances were on NBC 's Today show and at the Yankees 1996 American League Championship Dinner.  Members Jonathan Berkun, Charles Matthew Eddy, Mark Curtis Filstrup, Thomas Kitt and John Scott have a repertoire of over 60 songs & one of which impressed Tony Randall enough to exclaim, "Bravo, Lads!".

Formerly known as Sons & Lovers, Mystery Date performs at New York cabarets, concert halls, theaters and arenas across the country.  Their repertoire defies categorization ranging from Spike Jones and Gershwin Classics to the B52s and other contemporary songwriters.  Their critically acclaimed recording is available worldwide on CD and they are currently at work on their second recording, "Sweet Sixteen".   Mystery Date 's new incarnation is Ken Brown, Joshua Koffman, Bob Stern and John Whitley.

What is Voxy?  Is it a real word?  Voxy is seven dynamic and talented women who have day jobs, but at night love entertaining with the power of their voices alone.  Voxy was founded in February of 1999 by several Cornell University grads who recruited new members and now perform at many New York venues and private functions.  Members Aley, Allie, Angel, Indu, Margaret 1, Margaret 2 and Maria-Stella already won the award for the most daring video submission.

Having been performing for only a few months, pop-funk mixed quartet All About Buford has already made many appearances, including talk and music radio.  Members Adeel Pandith, Amy Malkoff, Shah Salmi and Taunia Soderquist have performed at the East Coast A Cappella Summit, The Nameless Coffeehouse, The New Song Cultural Center, Fire & Water and on radio shows in Boston.  They have varied musical influences, as evident in their show.  "Highly talented, strangely unique, yet always entertaining! " Vocal Universe.

Based in the Philadelphia area, PhilHarmonix is a mixed quartet that performs at regional venues from central Pennsylvania to the Jersey shore.  They are a popular feature quartet on chapter shows, community concerts, banquets and trade shows.  In August 2000, PhilHarmonix performed at Political Fest, in conjunction with the Republican National Convention in Philadelphia.  On the national scene, PhilHarmonix won gold medals in both the 1999 Mid-America Barbershop Quartet Expo in St. Louis, Missouri and the 2000 Buckeye Invitational in Columbus, Ohio.  Members of PhilHarmonix are Donna Perrone, Amy Carr, Tom Halley and Rick Serpico.